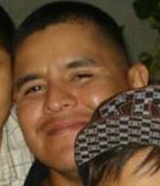 By Matt Hamilton and Kate Mather

Omar Gonzalez, a 36-year-old Latino, was fatally shot by a police officer Thursday, July 28, in the 1200 block of Atwood Place in Boyle Heights, according to Los Angeles County coroner’s records.

The pursuit lasted just a few minutes before coming to an end in a cul-de-sac. A man who was a passenger in the car got out of the vehicle and ran up a driveway, Preciado said.

At least one neighbor told the two police officers that the man was armed with a handgun.

One of the officers shot the man about 7:45 p.m. He was taken to the hospital and later died of his injuries, Preciado said.

It’s unclear what precipitated the shooting. Police did not specify how many times the officer fired his gun, and it’s unknown whether Gonzalez also opened fire.

The pursuing officers, both men, were equipped with body cameras and a dash camera inside their police cruiser.

The woman who was driving the stolen vehicle was arrested on suspicion of felony evasion of police, Preciado said. Her identity was not released, and it’s unclear how she was connected to the man who was shot by police.

None of the officers or area residents were injured during the shooting.

The next morning, Ariel Leon lighted a white candle at the end of the driveway. He stepped back, crossing himself, then kissed his hand and pointed it toward the sky.

Leon, 32, said he had known Gonzalez for more than a decade. He described Gonzalez as a good person who worked construction and was a loving father to two young boys.

Do you have information to share about the life of Omar Gonzalez ? The Homicide Report needs your help. Please fill out this form or e-mail us at homicidereport@latimes.com.

You will always be in our heart. We miss you today as much as the day you left us. Nat the boys and myself will always carry you in our broken heart. To my eternal love 💕 Until we meet again 😘 Love you punk!

Miss You Soo Much , Life Without You Ain't The Same 💔

We love and miss you so much
It’s hard to believe your gone.
So many childhood memories
And it still hurts to think that you are not here with us anymore.
Such great human being with a big heart. You will always be missed. ❤️ Forever in our hearts Omar Gonzales.

Rest in peace brother. Things shouldn't have been this way. it wasn't your time. I miss you so much. You will always b in my broken heart and your family's as well. until we meet again bro...

I'm going to miss you Omar, it's funny how God takes people from us who he shouldn't have tooken but like they say every dog has their day. Rest in peace my brother and hope to see you soon

REST IN PEACE POPPSS. My little Brother and I miss you a lot and love you. It shouldnt have been your time . You were gone to soon. You will always be in mine and my little brothers broken hearts. We hope to see or hear from you soon.