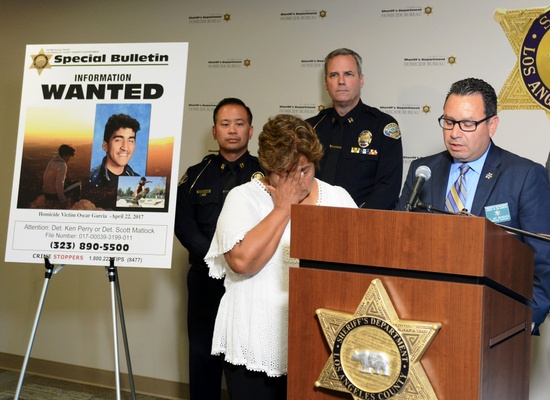 Oscar Andrew Garcia, an 18-year-old Latino, died on Sunday, April 23, after he was shot in the 100 block of West Cypress Avenue in Monrovia, according to Los Angeles County coroner records.

Garcia, a high school senior and aspiring photographer, had gone to the home of a female friend on Saturday evening with a male friend, Los Angeles County Sheriff’s Lt. Joe Mendoza said during a news conference May 11.

The three students were talking in the garage about 11:36 p.m. when a man in his early 20s walked through the door and pointed a handgun at them, Mendoza said. "A brief verbal exchange occurred, and the suspect opened fire," he said.

Garcia and his male friend were struck by gunfire. Garcia was pronounced dead at the scene at 12:07 a.m. with multiple gunshot wounds, according to coroner’s records. His friend was taken to the hospital in critical condition “but miraculously survived his injuries,” Mendoza said.

The suspect was described as a light-skinned Latino, about 6 feet tall and medium build, with brown eyes, black short hair, a goatee and a black baseball-type cap with an unknown logo. He was last seen running south into the alley. 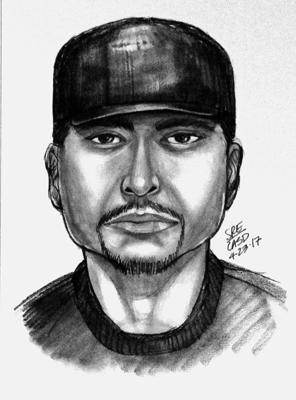 Investigators are seeking help because they haven’t been able to get any information about the shooter, or a possible motive, Mendoza said. This is the first homicide in Monrovia since June 2015. The quiet, shady street where Garcia died is behind a modern business park, and signs outside several homes urge motorists to “drive as though your children live here.”

Mendoza said investigators don’t believe Garcia or any of his friends were targeted. “Oscar could be anybody’s youngster,” he said after the news conference. “He wasn’t a gangster; none of them had gang affiliations. He was just hanging out in a garage with a girl and his friend. There’s no reason these three should have been shot at.”

Garcia grew up in Monrovia, a small city east of Pasadena. He played soccer at Canyon Oaks High School and loved to skateboard. After graduation in June, he planned  to attend Pasadena City College and study photography.

During the news conference, Garcia’s mother, Guadalupe Castañeda, stood quietly beside Mendoza as he laid out the details of the shooting and then took the microphone herself, her eyes closed, speaking through tears as she asked the public to identify the man who killed her son.

Garcia was the second youngest of Castañeda’s six children, and she described him as a loving, “extraordinary kid,” who would “always go the extra mile to care for us.”

“He loved skateboarding. That was his passion and that’s how he made a lot of friends,” she said. “He used it as way to bring peace and love to the community.”

“We could always count on Oscar to be a respectful gentleman and offer a helping hand,” reads one comment on the website. “Coming from a big family, Oscar was generous and always put others before himself.”

Share a memory or thought about Oscar Andrew Garcia

My friend actually knew him. Sad to see him gone. All his friends miss him already. I never knew him but if I knew him, i would be sad too. He seemed like a nice guy. 🙏