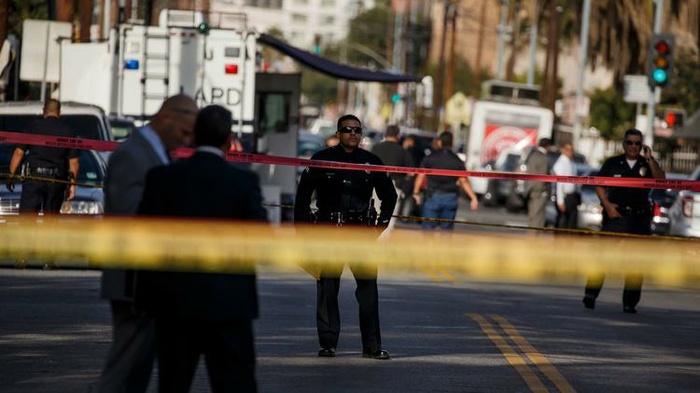 About 1 p.m., officers with the Los Angeles Police Department’s Metropolitan Division were driving near East 27th Street and Maple Avenue when they spotted a man who they “believed was about to burglarize a vehicle,” said LAPD Det. Meghan Aguilar.

The officers stopped to investigate, Aguilar said, and the man, later identified as Cartagena, ran.

The officers chased him to the back of a nearby home, where one officer shot him.

Cartagena was pronounced dead at 1:14 p.m. at the scene, according to coroner’s records.

It was not immediately clear what happened in the moments before the shooting or why the officer fired, Aguilar said.

Investigators found a handgun near the man’s body that they believe was his, she added. It was also not clear why the officers thought the man intended to burglarize the vehicle.

The officers were in the neighborhood as part of the department’s “crime suppression” efforts in which Metro officers monitor certain areas for criminal activity. Aguilar said investigators would canvass the area for any surveillance footage that may have captured the chase or shooting.

The officers did not have body cameras or a camera in their vehicle, she said. No officers were injured. Investigators blocked off Maple Avenue with yellow police tape that day,  drawing the attention of neighbors and children walking home from school.

Share a memory or thought about Pablo Renato Cartagena

its not only that one cop. your missing the point. "kelly'' its been many cops that just go ahead and take peoples life away...
if you don't know the details you shouldn't even be saying nothing. Personally knowing Pablo he was'nt a bad person, he never killed no-one. so what is your point??.. that the cop put his life in danger? so we the people don't matter because we aren't cops??? in other words its okay for officers to take anyones life away because their back up is that their life is in danger, thats the job they signed up for!. why didn't the officer have a camera? only when its convenience to them they have cameras.. that officer was not in danger,!. ''kelly'' 'kelly'' keep your comment to your self unless you are that cop, that killed Pablo. AND TILL THIS DAY THAT SO CALL OFFICER HAS NOT SAID WHY HE SHOT PABLO. he shot Pablo from behind, why didn't he shoot him in the leg or arm if it was that necessary to shoot him??? Explain that.. plus there is a witness, Pablo begged to not get killed, they just arrested him after shooting him and watched him chock on his own blood, then after Pablo passed they called the ambulance... its called a murder they left him laying for 10 hours they didn't even cover his body!! what does that sound like?? Cold heart Murder. or else this article would not be under homicides!!! why isn't the witness speaking up? maybe she got warned about speaking up.. yup our system is F'up.. but its okay for officers to leave little kids without a father, a mother with out her son, a wife without her men, the nephews without an uncle, the sister with out a brother, etc etc.. and the answer is because they are the law and putting their life in danger even if their life isn't in danger.
MY POINT IS, IT WASENT NECESSARY TO KILL PABLO!! ITS NOT NECESSARY FOR OFFICERS TO KILL ALL THE TIME.

Pablo you are truly missed, loved, and never forgotten. rest in peace.

Renato,
Well the same could be said for someone who feels better walking around with a gun, and someone whose criminal record indicates that he used that gun to get what he wanted from someone he put in a weak position. I have had a gun. So bottom line; say what you want about the police, I would rather that the person who is standing at the end of the day is the cop who puts his life on the line to protect is the one I would rather have standing than the one that pulls out his gun in order to use it to induce fear. So it doesn't matter what this ex-con was at home, he made a decision to have his life end so that each and everyone of us has the right to judge his life, his life style and his choices,

its crazy that these so call officers can just take someones life away just because they suspect, and it be okay for them to kill because they are the law they get away with it. They don't serve no time, no justice for the lives they take, they don't feel that pain they leave, the change they make in many humans life by taking someones life away. The saddest thing about all this is that a 2 year old was left with no father, BECAUSE A POLICE OFFICER MURDER HIM, COLD HEART MURDER!. meanwhile the officer moves on with his life, gets a month off and Paid! And we the people are hurting, the kid don't get a chance to have a father, the father didn't get a chance to be a father!!
STOP POLICE BRUTALITY! POLICE PLEASE STOP KILLING! to protect and serve NOT to suspect and kill !!!

REST IN PEACE PABLO
He was a loving father, son, brother, husband, cousin, uncle, friend... You are loved, missed ,and never forgotten.

That's in the heart of the Ghetto Boyz gang. Most probable gang-related.