Pasadena police on Tuesday announced the arrests of eight suspects following a months-long investigation into a series of deadly shootings that authorities believe were part of a gang feud.

"This morning, I'm proud to announce as a result of some brilliant police work, eight suspects responsible for the shootings are in police custody," Sanchez said. 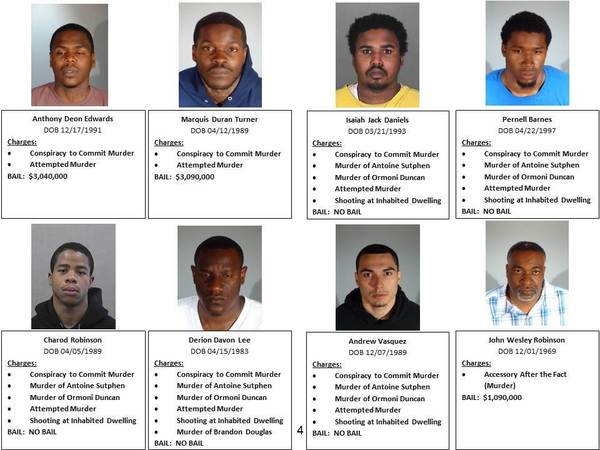 The men were booked on suspicion of a variety of crimes, including murder, attempted murder, conspiracy to commit murder and gang allegations, according to Pasadena police.

The arrests follow a six-month investigation into an alleged gang feud between Pasadena and Duarte street gangs, according to Pasadena police. The eight arrested are all believed to be members of the Duarte street gang, police say.

"I cannot emphasize enough just how difficult this particular case was and how proud I am of the work this team accomplished in apprehending the suspects responsible for the shootings," Sanchez said.

Authorities say the men were tied to the following three shootings:

On Jan. 6 at approximately 11:51 p.m., Antoine Sutphen, 24, and Ormani Duncan, 24, were shot and killed in the 100 block of West Claremont Street. A female adult, 37, was also shot but survived. Daniels, Barnes, Robinson, Lee and Vasquez were booked in connection with those deaths.

On Jan. 16 at 2:24 a.m., several people were gathered in the 800 block of North Garfield Avenue when suspects opened fire and struck an 18-year-old female bystander who survived.

I don't know weather 2 give 2 thumbs up that these punks were caught, guess i'll wait to see if justice is truly served. While I wish they all suffer the same pain n suffering the victims suffered what's more disturbing is our society as a whole is caught up in the mayhem of the streets. just look at the Box office # of violent movies, T,V programs , being broadcast, n the people who get rich of the shame these shows portray do they ever drop by 2 offer any condolences, me thinks not .America is falling slowly but surely because this nation condones the same sinister dog eat dog mentality some of it's citizens display daily. We all r responsible weather black white,hispanic,asian or native american. I's just a matter of x when we will see the error of our way's as a nation. 1 way or another, so yes this is tragic, but no race or group of people r immune to the devils plan 2 destroy n capture as many souls he can, hope u don't become his next prospect.Real talk.