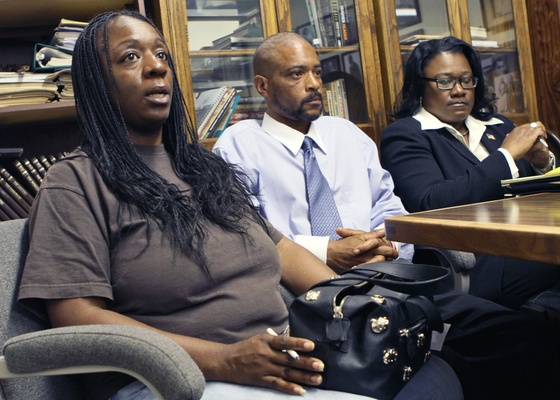 A new copy of an independent consultant's report on the 2012 fatal shooting of an unarmed black teenager by Pasadena police officers includes more criticism of the way the city's police department handled the investigation into the killing.

The latest version of the report on the shooting of Kendrec McDade includes several sections that the city previously tried to keep hidden from the public. Among them is a portion that says the two officers who shot McDade were never asked by department investigators whether they considered warning the 19-year-old that "they were about to use deadly force if he did not stop his perceived aggressive actions."

Another unredacted portion says that a memo provided to the officers outlining whether their actions violated department policy "does not come close to the level of detail that would be necessary for detailed feedback."

The new version of the report also shows that the department conceded that the officers should have been asked why they didn't activate their patrol car's camera while they chased McDade. Police officials said it would have been extremely useful to have had video of the events that led up to the shooting, according to the report.

Pasadena officials released the new version of the report this month after an appellate court ruled that redactions made by the city went too far and were designed to shield the police department from criticism rather than protect the officers' privacy rights.

Dale L. Gronemeier, an attorney who represents McDade's mother, described the city's redactions as a "cover-up" designed to blunt criticism of the police investigation.

"There's no honest rationale that could justify them," he said.

McDade was shot by Officers Jeffrey Newlen and Matthew Griffin, who are white, as he ran from police on Sunset Avenue after dark. The district attorney's office found that the two officers reasonably believed McDade was armed with a gun based on false information from a 911 caller, who reported that his laptop had been stolen by two armed men.

The crime turned out to be a simple theft by McDade and another young man. One officer said he saw McDade's hand at his waistband during the pursuit and thought the teen was about to shoot him, according to a district attorney's report on the shooting.

The city hired the Office of Independent Review Group to analyze the officers' actions and the department's investigation of the killing.

The Times, along with McDade's family, sued to obtain a copy of the group's report over the objections of the police officers' union.

A redacted version of the report was released by the city last month and showed that the consulting group sharply criticized the department's investigation and the tactics used by the two officers. According to the report, Pasadena police did not determine whether witnesses could corroborate or refute claims by the officers that McDade had been clutching at his waistband as he fled.

The report also faulted the department for waiting 36 hours before interviewing the officers, for providing the pair with video recordings of the aftermath of the shooting before their interviews and for not conducting a separate internal affairs investigation into the officers' tactics, among other criticisms.

The report also found that the officers committed numerous tactical mistakes that placed them in a "precarious position so that once Mr. McDade made an unanticipated move," deadly force was the only option.