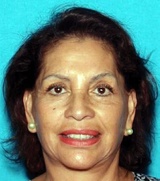 Paula Barrajan Montoya, a 64-year-old Latina, was pronounced dead Thursday, July 21, after she was strangled in the 6600 block of Pine Avenue in Bell, according to Los Angeles County coroner's records.

Her granddaughter, Sarah Montoya, 24, is scheduled to be arraigned Aug. 25 in the Los Angeles County Superior Court’s Norwalk Courthouse.

Bell police went to check on Paula Montoya around 7:30 a.m. at the request of her son, who lives out of state, said Los Angeles County Sheriff's Lt. Mike Rosson. The son said he usually spoke to his mother daily, but he hadn't heard from her for several days.

When officers entered the house, they found Montoya’s body in the bathroom, wrapped in blankets and clear plastic, Rosson said. She was pronounced dead at the scene at 7:40 a.m., according to coroner’s records.

The coroner’s office later determined that she died of asphyxiation by neck compressions, and that she also suffered several broken ribs and a head injury, The Times reported.

Family members described Montoya as a doting grandmother and great-grandmother who was active in her church. She was last seen at her residence on July 18, with Sarah Montoya and Sarah’s four young children, Rosson said. Investigators believe she died later that day.

Sarah Montoya was mostly raised by her grandmother, Rosson said, and lived with her off and on as an adult because she had no permanent residence.

Family members reported that Sarah Montoya and her children disappeared after July 18. On Aug. 2, Rosson and family members put out an appeal to the public, asking for help to find them.

Rosson said investigators got a tip that Sarah Montoya had gone to Mexico and was planning to return to California. Mexican authorities detained her at the Otay Mesa border crossing on Aug. 3, and turned her and her children over to the U.S. Marshals Service, The Times reported.

After her arrest, Sarah Montoya confessed to killing her grandmother, authorities said. “She said she just snapped,” Rosson said. “They got into an argument, which escalated into a fight and she ended up strangling her.”

Sarah Montoya is being held in lieu of $2 million bail. Her children, who range in age from 1 to 9, are in good health, Rosson said, and in the care of family members.

Do you have information to share about the life of Paula Barrajan Montoya ? The Homicide Report needs your help. Please fill out this form or e-mail us at homicidereport@latimes.com.

Share a memory or thought about Paula Barrajan Montoya