Los Angeles County sheriff's investigators have released a photo of a dark-skinned young man with close-cut black hair who is a "person of interest" in the shooting that killed Israel Castaneda, 35, as he was standing outside a Palmdale market on March 31.

Castaneda, a Palmdale resident, was outside Michael's Liquor and Market at 37935 47th St. East around 10:50 p.m.when he was shot multiple times in the face and shoulder, according to Los Angeles County coroner's records.

He was pronounced dead at the scene at 11:15 p.m., according to coroner's records. Witnesses reported seeing a man of "unknown race" running away from the scene heading south on 47th Street, but it wasn't known if he was involved in the shooting, according to a Los Angeles County sheriff's news release. 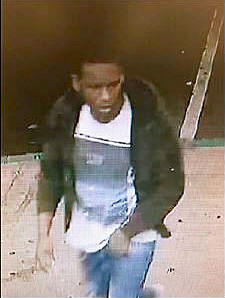 The man in the photo is wearing jeans, a white T-shirt with some kind of design on the front and an unzipped hooded jacket.

Anyone with information is asked to call Dets. Teri Bernstein or Kasey Woodruff at the sheriff's Homicide Bureau, (323) 890-5500. Those wishing to remain anonymous should call Crime Stoppers at (800) 222-8477.

could have sworn i seen him at the dollar tree in the city of bell on valentines day.

Hope he is located.
Seems he was having to use his hand to hold up his sagging britches.