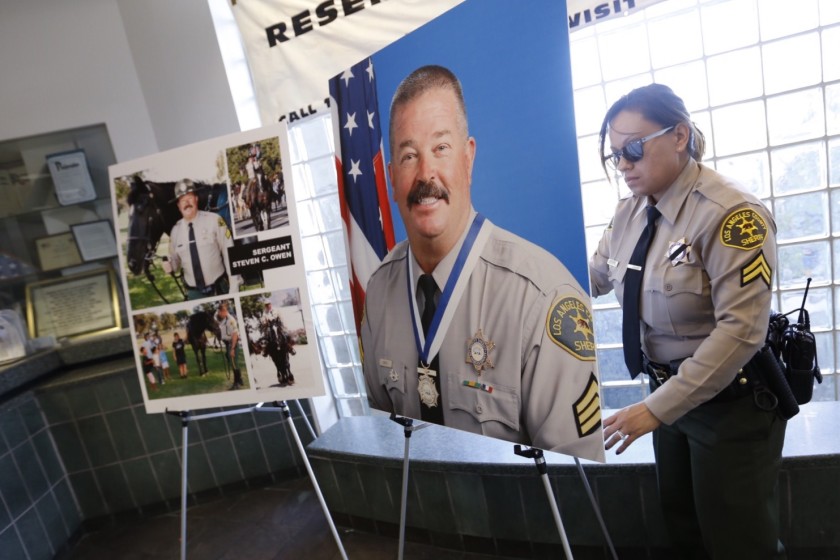 A man accused of gunning down a Los Angeles County Sheriff’s Department sergeant and nearly running over another deputy in 2016 pleaded guilty to murder April 22 and is expected to be sentenced to life without the possibility of parole under the terms of a plea deal this month, officials said.

Sgt. Steve Owen, 53, was responding to a report of a break-in when he was shot by 31-year-old Trenton Lovell, authorities have said. Lovell previously confessed to emptying his revolver into Owen’s body during the deadly confrontation, admitting he “finished the job,” according to court documents made public in 2018.

Lovell pleaded guilty to murder, attempted murder, false imprisonment and robbery in connection with the attack on Owen and the chaotic manhunt that followed in October 2016, prosecutors said. After killing Owen, Lovell was shot and wounded by a deputy. Police said Lovell then tried to steal a Sheriff’s Department vehicle before running away.

As law enforcement set up blockades in the neighborhood, Lovell ran into a nearby home where police say he stumbled upon two teenagers. The teens “befriended” Lovell, and one faked a panic attack so they could contact their mother, who told deputies where the suspect was hiding, the family previously told The Times. Lovell was captured a short time later.

“Sergeant Owen was murdered in the performance of his lawful duties protecting his Antelope Valley community,” L.A. County Sheriff Alex Villanueva said in a statement. “As his LASD family continues to grieve his murder, I stand in solidarity with his family and friends.”

As part of his reform efforts, Los Angeles County Dist. Atty. George Gascón has barred his prosecutors from filing special-circumstances allegations that can lead to sentences of life without parole; however, the allegations against Lovell were filed long before Gascón took office.

In February, an L.A. County Superior Court judge ruled that Gascón could not order prosecutors to remove special circumstance allegations or sentencing enhancements in active cases unless the dismissal was in the interest of justice or if there had been a change in the evidence used to bring the allegation in the first place.

“Sgt. Owen sacrificed his life to protect the community he served,” Gascón said in a statement Thursday. “This plea will not bring Sgt. Owen back but will hopefully provide some small measure of peace to his family.”