Only a few elements of the man’s death are certain.

It was a warm night in Los Angeles on Sept. 14, 2014. The man’s body was definitely burned. He was found after firefighters responded to a call at 1111 South Harvard Blvd. in Harvard Heights. 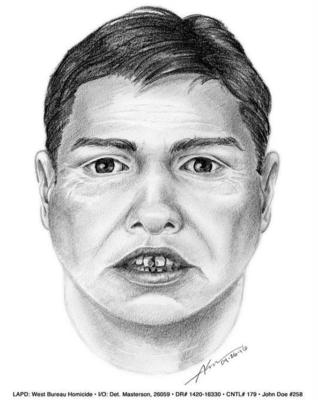 Beyond that, Los Angeles Police Det. Scott Masterson is going off theory. The county coroner never determined a cause of death for John Doe No. 258.

Minutes before the fire, two women were walking along South Harvard Boulevard on their way to a liquor store when they smelled gasoline. When they came back, they saw a fire truck’s flashing lights.

On the property where John Doe No. 258 was found, the plants were overgrown and there were several buildings in disrepair. The man's body was found between a temporary chain-link fence and a low brick wall. To Masterson, that’s the key.

“We knew he was dead when he was burned,” he said. “Nobody lifted him [while he was alive] over the chain link fence and threw him.”

The two homes and an apartment complex on the property were vacant and strewn with trash. People hid out at the complex and one of the homes to take drugs, Masterson said.

As a detective for 10 years, his first thought was that John Doe No. 258 must have overdosed, then the people around him panicked and tried to dump the body and burn it.

One piece didn’t make sense though: the coroner found no drugs in the man’s system.

Masterson has visited the scene dozens of times and at all hours. He contacted neighbors and tried to identify the man through DNA. He knows that people move.

“Half the neighborhood probably doesn’t remember this, but we still do," he said.

The book in which Masterson keeps the death investigation file is thick, yet none of the pages hold the man’s identity.

New construction is slated for the lot where the man was found. Masterson still wonders who his John Doe might be and what happened the night he died.

“You can’t help but think if it was a family member of mine, you wouldn’t want the police just to write it off and say, ‘Oh some guy just got burnt up, oh well,’” he said.

Recently, he had a composite sketch made from the clues he does have: photographs and information from the coroner’s office and details from the crime scene.

Masterson’s next step is to get information out to Central and South America through the International Criminal Police Organization.

Photo: Shown is a composite sketch of John Doe No. 258. Credit: LAPD