Police recently released a photograph of a person of interest in the shooting death of a 37-year-old man at a gas station near the edge of downtown Los Angeles in April.

Shortly before 10:30 p.m. April 12, Sergio Beltran was walking back and forth between a gas station and a taco shop near South Central Avenue and East Washington Boulevard, said LAPD Officer Deen Alcaraz. 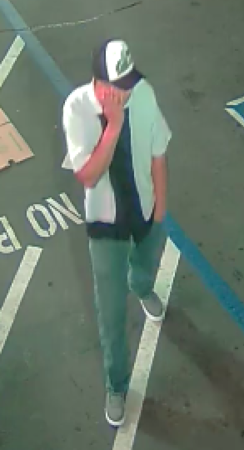 It’s unknown whether Beltran got into an altercation before he was shot, but police believe that someone walked up to him and shot him at the gas station, Alcaraz said.

The shooter may have jumped into a small, four-door sedan.

Police are looking for additional witnesses.

“People are afraid to come forward it they were there,” Alcaraz said. He said that the nearby taco restaurant is crowded and the gas station is fairly busy about that time.

“It’s just a matter of somebody saying, ‘Hey, this is what I saw,’” Alcaraz said.

There is also a $50,000 reward for information leading to a conviction.

Beltran was a married father of two who lived in Boyle Heights. He worked in construction.

Anyone with information is asked to call the LAPD's Newton Division detectives at (323) 846-6556.

Photo: A surveillance still taken from the area of the shooting shows a man police are hoping to identify. Credit: LAPD