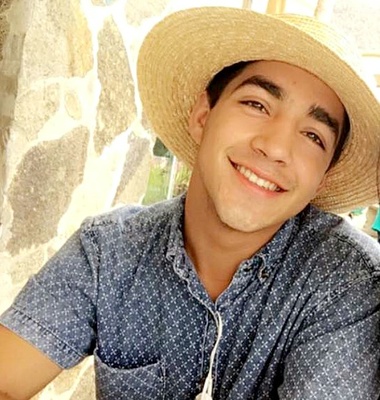 Rene Alejandro Lupian, a 22-year-old Latino, was fatally shot on Wednesday, Nov. 7, in the 900 block of South Concourse Avenue in East Los Angeles, according to Los Angeles County coroner's records.

His older sister, Christian Lupian, said she thinks the robber might have been attracted by her brother's necklace, which was lying on the ground when officers found him.

"I think he tried to snatch it, rip it off him," Christian said. "It was gold, with a cross, something our grandma gave to him before she passed away six months ago. I would tell him sometimes, 'Dude, don't wear that out,' but he was so proud to wear it. It really meant a lot to him."

Lupian worked at the Pico Rivera In-N-Out Burger and when his shift was over Wednesday, he got a ride to a spot near his Montebello home,  Baljet said.

Christian said her brother often stopped at a Little Caesar's a few blocks from their home after work to bring home pizzas to the family. It's not clear whether he did so that evening, she said. Investigators believe he set out with his backpack to walk the rest of the way home around 10:30 p.m., Baljet said.

What happened next is unclear. Residents told investigators they heard yelling and then saw someone punch Lupian and shoot him.

The attacker, described as a Latino in his 20s, took Lupian's backpack and ran away, Baljet said. A white compact vehicle was seen leaving the area around the same time, he said, but it's not known whether it was connected to the shooting.

People in the neighborhood called 911 and Lupian was taken to a hospital where he was pronounced dead at 11:07 p.m., according to coroner's records. The cause of death was listed as gunshot wounds to the head and neck.

Lupian was helping his mother with household bills, his sister said. Friends of the family have started an online fundraiser to help cover burial costs and other expenses.

Lupian spent most of his childhood in Chino Hills, his sister said. After their parents  divorced, they moved with their mom and younger twin brothers to Mar Vista. He loved music, especially the Doors, and was an inspiration to his 15-year-old brothers, she said.

"He had a huge heart and a contagious smile. He was extremely polite and kind, and our brothers looked up to him very, very much."

Lupian graduated from University High School in Venice and studied for a year at Antioch University, "taking a lot of writing classes," his sister said.

"He really like writing, especially writing poems, but he didn't know what to do with it," she said. "He would just write poems and stuff for himself, and share them with me. He was actually really, really good."

Two years ago the family moved to Montebello and Lupian focused on his job at In-N-Out while he tried to decide his future career. "He was providing some support for my mom and he had applied to a trade school. He thought he wanted to be an electrician but he was undecided.  He was just 22 and still trying to figure things out."

Anyone who sees Lupian's dark-colored Jansport backpack should call investigators at the sheriff's Homicide Bureau, (323) 890-5500, Baljet said. Lupian changed his shirt before he went home, so it's possible the backpack will have an In-N-Out work shirt inside, he said.

Do you have information to share about the life of Rene Alejandro Lupian ? The Homicide Report needs your help. Please fill out this form or e-mail us at homicidereport@latimes.com.

Share a memory or thought about Rene Alejandro Lupian

These are the types of killings that infuriate me. It just isn't fair that someone hard working and a good person from a good family is put to death over a piece of jewelry and beer. At least that's what the papers report. To me, this seems more like a gang initiation thing and Rene was the unfortunate choice as a victim. Not only was the chain not taken but it seems to be in line with the common practice in gang initiation killings of simply going up to the intended victim, asking him where he's from, and often times shooting them dead before they even have a chance to answer. Sadly, many of the victims are innocent, non-gang members who work hard and are heading down the straight and narrow in life. What gets me is many are also randomly chosen. I don't care if gang members kill each other but why must they kill innocent people from the community? How in the hell does that prove them fit to be in a useless gang? It only makes you fit for jail and only proves you can pull this little thing called a trigger, which doesn't make you badass but more like a coward.

If it wasn't a gang initiation thing, why did the robber have to kill him? Threatening him with the gun would have been enough for Rene to turn over the sought after piece of jewelry. It's still an awful thing to do to someone but at least he would still be here charming people with that dashing smile of his and serving as a valuable member of the community. These trigger-happy criminals almost always express remorse when they are caught and face long jail sentences, so why don't they think before they do something that will make their freedom a thing of the past and cause them to regret what they did? Very few get away with something like this, so it just baffles me how easily some people kill and over petty things.

My heart goes out to the family of Rene. I can't imagine the pain they are going through right now. I will pray every day that Rene's killer is caught soon. Rest in peace Rene. Your death has touched many people. I hope the killer pays for the misery he/she caused over nothing.

They will catch these people justice will win

This is so sad. I am so sorry for the family. I hope they catch these hkrrible beasts and guve them the same. I hope they resist.

I never knew this person but whoever killed him hope the killer gets caught. That’s why we should be careful where we go out. Especially in the night.

So sorry for your loss.i hope they find the person who did this.Rest in Peace

I did not know Rene. Although I wish I had. He seems like a good, kindhearted young man. This truly breaks my heart. When does the senseless violence stop?! Whoever did this is a coward. Nothing less, nothing more. And although they haven't been caught yet, they haven't escaped anything. God is always watching. Rest in Heavenly Peace, Rene.

the senseless murder of this young man made me cry. i do not know him but just looking at his beautiful face without an ounce of malice who did not deserve to die so young, brought back all the pain and grief of losing my 20 year old son back in 1998. my sons killer was never caught but i hope Rene Lupians killer is caught. my sincere condolences and prayers go out to the Lupian family.

Sending prayers to the family and a if hug to my friend Xóchitl.

I knew rene since he was 11yrsold ,he had a heart of "gold" he adored his mother, loved his brothers,and sister.
He always wanted his dad to do well in life. He always followed his heart, he loved his gf to the fullest!! His favorite band is aeorsmith, he skated and enjoyed los angeles, an all around great person, kind ,honest,strong,
Hard working and very caring youngman.
"I Love You Kidd"
May god welcome you with open arms.
My Lil buddie
Rene

Rene was and still is a great friend. He and I didn't spend much time together while attending Venice Skills Center but from the memories I remember we laughed together a lot. He was always a kind person who'm never sought out trouble. His spirit lives on in the lives he's touched. He will be surely missed.

Rene was a loving, thoughtful, and caring young man. He was full of life.. Just a good soul all around.
His life was cut too short by someone who decided to take his life into their own hands. This heinous crime must not go unsolved and must be brought to justice. #JusticeforRene

I went to grade school with Rene at Reppetto Elementary school in Monterey Park , CA . He was a very nice social guy and was cool with everyone .