Jill Leovy, who founded the Homicide Report eight years ago, has written a new book,"Ghettoside: A true story of murder in America" (Spiegel & Grau). In it, Leovy examines how murders are investigated and what it would take to change policing in communities where many crimes go unsolved. A veteran Times reporter, she spent 2007 chronicling every homicide in Los Angeles County.

In the book, Leovy takes a deep look at the killing of Bryant Tennelle, the 18-year-old son of an LAPD officer, who she first wrote about in this report. Initially conceived of as a yearlong project, Homicide Report continues to serve the community today.

Here's an excerpt from a review in The Times written by Sudhir Venkatesh, a professor of sociology at Columbia University:

"For three decades, we've been told that there is an epidemic of violence in urban black America — 'plague' is Leovy's preferred term. Our jails and prisons are filled with minorities, police legitimacy remains low and inner-city families appear resigned to these conditions. Police seem as overwhelmed and frustrated as the minorities whom they must protect. Leovy underscores the urgency to respond but not in a predictable manner.

"Her premise is simple, powerful and runs counter to prevailing views. The crisis does not stem from over-policing and mass incarceration per se. Instead, these are symptomatic of a deeper problem that she refers to as 'too little application of the law.' 'Where the criminal justice system fails to respond vigorously to violent injury and death,' Leovy writes, 'homicide becomes endemic.'

"If we saturated minority neighborhoods with the police resources they needed, she argues, we might stand a chance of stemming violent crime and giving families their neighborhoods back."

Read the full review: 'Ghettoside' focuses on one L.A. murder to make case for more policing 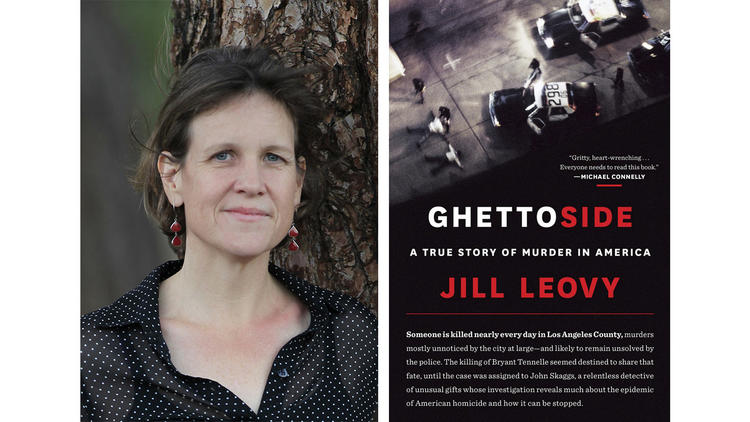 @Whe-Whe-Olitza, Jill has done a great job on putting a face and a memory of the day to day trauma that has been going on for years in Los Angeles. You can reach out to the various organizations that are out in the streets that are making an effort to intervene on personal situations that can become deadly. The more we have the ability to resolve our problems through conflict resolution efforts, the more likely there will not be homicides. The So. Cal. Cease Fire Committee is a collaborative group of Interventionist, Victims, Clergy, Community Citizens, and Law Enforcement that works collectively to stop homicides in South Los Angeles. Google us.

I have just started reading the book. I am on page 26 and already in tears. I am a 65 year old Native American living on the Olympic Peninsula (Washington state). I have no exposure to the incidents of ghettoside.

What can a person such as me do about this situation?

I would love to help but am frustrated because I don't know what to do.

The killings will continue as long as the community thinks their civil rights are more important than their safety.

It should be ghettocide. Not ghettoside.