Reward offered in killing of 22-year-old in Compton 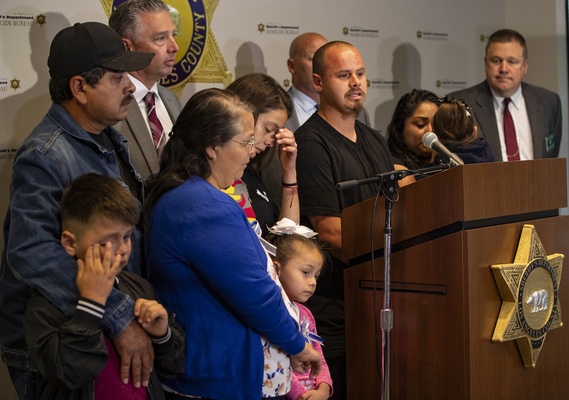 A $10,000 reward is being offered for information in the shooting death of a 22-year-old man who appears to be the victim of a “totally unprovoked” attack, officials said.

Gerardo Macias Hernandez, 22, was shot and killed shortly before midnight Saturday, March 16, in a Compton strip mall in the 2800 block of East Alondra Boulevard.

Earlier that night, Macias Hernandez was visiting with family when he heard a car accident and urged his family to go to the scene and help.

After Macias Hernandez, along with six others, left the scene of the accident, they went to get gas in a Chevy Tahoe. The Tahoe pulled into a strip mall about 11:30 p.m. and three vehicles drove slowly toward the Tahoe.

A person shot at Macias Hernandez from a dark-colored sedan and then sped off, authorities said.

Officials said that after reviewing video footage, the attack appeared to be completely unprovoked.

Sheriff's Det. Gary Sloan said at a news conference last week that Macias Hernandez was a “genuine” person who was emphatic about helping the victims of the car accident.

Macias Hernandez’s brother, Miguel Macias, flanked by family, said that his relatives are devastated, especially because his brother always helped people out without expecting anything in return. Macias asked the assailants to turn themselves in.

Macias' daughter, who was 21 months old at the time of the incident, was injured by broken glass when the shooting occurred. Macias said it’s unclear whether the girl will suffer permanent damage.

“Everything you do in life has consequences sooner or later,” he said.

The Board of Supervisors is offering a $10,000 reward for information that leads to the apprehension of a suspect in the killing.

Theres no war, & condolences to the family.Dumb stuff happens in Compton all the time...

Sadly there is a race going on in Los Angeles between black n brown 😔So disheartening ! My condolences to the family .

Senseless killings. Just awful. condolences to the family for their lost loved one. I hope there is justice in this. Rest easy. It's a dump to live there anyways. I'm sure he's happier.