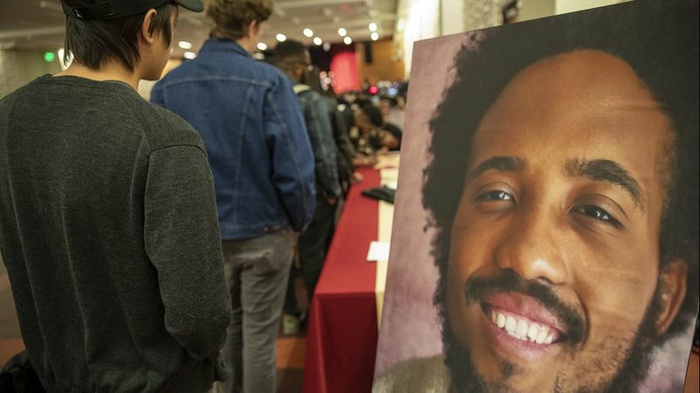 A $75,000 reward is being offered for information leading to the arrest and conviction of those responsible for the death of Victor McElhaney, a 21-year-old USC student who was fatally shot in March.

McElhaney, who was studying jazz percussion at the Thornton School of Music, was with a group of friends about a mile and a half from USC on March 10 when he was killed during a robbery outside a liquor store at Maple Avenue and Adams Boulevard.

The three assailants fled in a dark-colored sedan, police said.

No arrests have been made in connection with the slaying.

“It’s disheartening to know the killers are still on the loose while a family and entire community continues to grieve in search for answers,” City Councilman Curren Price said Tuesday when introducing the motion calling for the reward. “I hope [the reward] sends a clear message: We are committed to finding these killers and bringing them to justice.”

Supervisor Mark Ridley-Thomas, who presented the motion to the county board, wrote on Twitter, “Victor did good during his 21 years on Earth. We honor his brief journey and his contributions through music. We must bring those who are responsible for this ultimate violent crime to justice.”

McElhaney was the son of Oakland City Councilwoman Lynette Gibson McElhaney, who has consistently appealed to the community for information about her son’s death.

“We’ve got some men out there who don’t know the value of their own lives,” the councilwoman said earlier this month. “They don’t need to be at large where they can do harm to another mother’s son.”

Victor McElhaney had transferred to USC from Cal State East Bay in the fall of 2017.

A talented drummer, he had taught at the Oakland Public Conservatory of Music before coming to Los Angeles.

The City Council vote on the reward money was 12 to 0. Councilmen Mike Bonin, Paul Koretz and Greig Smith were absent.