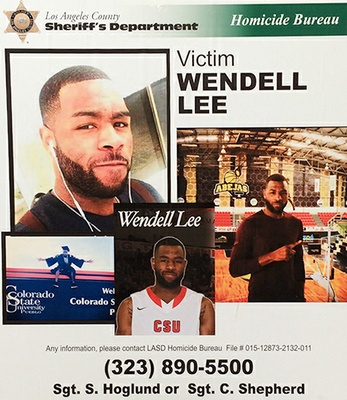 The mother of Wendell Lee Jr., 25, made a direct plea to his killer during a news conference announcing a $10,000 reward for those responsible in his fatal shooting last fall.

With her five surviving children by her side, Merry Matthews looked into the cameras April 6 and said, "I'm going to ask you to turn yourself in.

"No alcohol, no drugs can make this go away. It's not going away," she said, according to a Los Angeles County Sheriff's Department news release.

Lee was a native of Gardena who aspired to play professional basketball. He recently had graduated from Colorado State University in Pueblo, where he was described as a "basketball standout." He also was a singer and pianist who described himself in a YouTube video as a "church-going, God-fearing man."

Shortly before midnight, Lee was standing with a friend outside her residence in the 12200 block of Elva Avenue in Willowbrook. As they talked, a car pulled up and a man got out of the rear driver's side with an assault-style weapon, according to the news release.

The man shot Lee in the upper torso multiple times, according to the release. He then got back into the car, which sped away south on Elva Avenue.

Lee was taken to the hospital, where he was pronounced dead at 12:46 a.m. on Sept. 22. His friend was not injured.

The car had at least two other occupants, but witnesses couldn't provide descriptions, according to the release. The car is described as a silver Saturn Vue Red Line edition, made from 2003 to 2007.

Anyone who sees the vehicle or has information about the shooting is asked to contact the Sheriff's Department Homicide Bureau at (323) 890-5500. Those wishing to remain anonymous should call Crime Stoppers at (800) 222-8477.

Who does a drive by in a Saturn VUE? And a Red Line version? These are ignorant hood folks who will get caught. There's only so many in Los Angeles. Find the car, find the killers