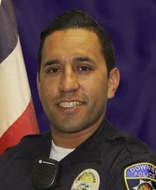 Ricardo Galvez, a 29-year-old Latino, was shot and killed Wednesday, Nov. 18 near 10911 Brookshire Avenue in Downey, according to Los Angeles County coroner’s records.

About 11 p.m., Galvez, a Downey police officer, was sitting in his BMW in the police department’s parking lot when two gunmen opened fire on him at close range, according to authorities. Galvez had just returned from a police dog training session about a mile away.

Investigators said the attack was a botched robbery by assailants who didn’t realize that Galvez was a police officer, according to Lt. John Corina of the Los Angeles County Sheriff’s Department.

"There was nothing indicating that he was a police officer when he was shot," Corina said. "I don't think he even really saw these guys coming up on him."

A police officer who was in the area at the time of the shooting heard a gunshot then saw a Nissan leaving the civic center parking lot, authorities said. The officer began chasing the car, and three suspects were taken into custody.

Three people have been charged in Galvez's death. Abel Diaz, a 16-year-old Latino, was charged with one count of murder with the special circumstance that a fatal shooting occurred during an attempted robbery, according to the Los Angeles County district attorney's office.

Jeremy Alvarez, a 21-year-old Latino, and Steven Knott, an 18-year-old Latino, face the same charges. All three are also charged with one count of attempted second-degree robbery as well as gun and gang allegations.

Diaz was charged as an adult and remains jailed in lieu of $1-million bail.

Diaz, Alvarez and Knott had their arraignments delayed Nov. 23 and are expected back in court Dec. 17 in connection with Galvez’s death.

They are being held without bail. Alvarez and Knott could face the death penalty if convicted and if prosecutors decide to seek it. Because of Diaz’s age, he faces a maximum sentence of life in prison if convicted.

Detectives have recovered a revolver that they believe was used in the deadly shooting, and the suspects have admitted to investigators that they were trying to rob Galvez, Corina said.

Detectives believe that Diaz and Knott approached Galvez as he sat in his car while Alvarez acted as the getaway driver, he said. Detectives were also investigating whether the three were involved in a recent string of robberies in Bellflower, Downey and Lakewood, he said.

Diaz’s sister, Maricela Alvarado, told reporters Nov. 20  that her brother was innocent. She said Diaz told her that he didn’t shoot Galvez but that his friend did.

"Words cannot express the love and respect we have for Ricky," he said. "Our department is hurting."

Galvez was deployed twice with the Marines during Operation Enduring Freedom, Charles said. The officer wasn't married and did not have children, he said.

Lloyd Vernis, 29, served with Galvez in Ramadi, Iraq. He said that when he opened a barbershop called The Pride on Firestone Boulevard, Galvez persuaded his fellow Downey police officers to patronize the business. Galvez got a haircut there about once a week, Vernis said.

Galvez is survived by a mother, a brother who is a jailer with the Downey Police Department, and two younger sisters.

Downey Police Lt. Mark McDaniel said Galvez started as a police aide at 18 and worked for several years before becoming an officer. Galvez became a Marine Reservist, according to McDaniel, while working for Downey police.

"If you were a police officer, you'd want to mold them after Ricky," said McDaniel. "He was always a guy you could count on to work ... words are hard to express what we lost today."

In a relatively small department of 109 officers, everyone knows everyone, and bonds are cemented by the unique nature of the work, McDaniel said.

"He was polite, he was hardworking, he always said 'Yes, ma'am,' 'No, ma'am,' 'Yes, sir,'" McDaniel said. "He was someone you would want all aspiring police officers to be."

Do you have information to share about the life of Ricardo Galvez ? The Homicide Report needs your help. Please fill out this form or e-mail us at homicidereport@latimes.com.

A robbery? Why did they have to kill him? Why does it say he likely didn't even see the worthless scumbag good for nothing punks slithering up on him? Does this mean they intended to first kill, then take his car from him? They just discarded him as if he were in the way. I sincerely hope these punks never set foot in the free world again.

RIP Officer Galvez. You served your country in Iraq trying to better the lives of the people back home & some young punks decide to thank you by robbing & then murdering you! This is a death penalty case if ever there was one!

My deepest sympathy for the Galvez family in the loss of your beloved Son and Brother,I also wanted to say that I am highly disappointed that no local television station, carried Officer Galvez memorial services live, as they do Officers who die in the line of duty from LAPD, instead some not all chose to streamline the services, but yet his Funeral was held in down town Los Angeles. I suggest that they do it for every Officer who is killed while serving the community in and around the Los Angeles area no matter if it's Downey or Inglewood or any other local town, they are all a part of Los Angeles City and County and again I'm sorry for your loss but I felt this had to be said..

You forgot to mention this gentleman was a police officer and one of the killer is a 16 yr old punk.

RIP officer Galvez, the City of Downey lost one of their finest. Hope your family can get through this, and that those responsible regret this for the rest of their lives.