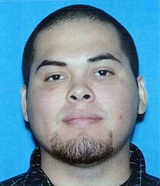 Richard Armando Mationg, a 22-year-old Latino, was shot and killed Saturday, May 10, in the 5800 block of Ben Alder Avenue in Whittier, according to Los Angeles County coroner’s records.

About 9 p.m., Whittier police responded to a report of gunshots and found Mationg in the frontyard of his home with a gunshot wound to the chest, according to a news release from the Whittier Police Department.

A man was seen leaving the scene in a silver vehicle.

Mationg was taken to a hospital where he was pronounced dead at 9:47 p.m., according to coroner’s records.

Hours later, Augustin Garcia, a 27-year-old Latino, turned himself in to police in connection with the shooting, said Brad White, the community relations officer.

Garcia was charged May 13 with one count of murder with  allegations that he used a firearm causing death and that the crime was committed for the benefit of a street gang, according to a criminal complaint filed by Los Angeles County prosecutors.

Do you have information to share about the life of Richard Armando Mationg ? The Homicide Report needs your help. Please fill out this form or e-mail us at homicidereport@latimes.com.

Share a memory or thought about Richard Armando Mationg

I went to high school with akae, man Ima miss you bro I can't believe it. Rest In Paradise Richie

Danish42,
The killer probably has orders to go to prison for another killing so it wasn't a matter of conscience it is a matter of finishing a job in prison.

The shooter should have had a conscience & NOT fired in the first place!!!!!

At least the killer had a conscience to turn himself in.