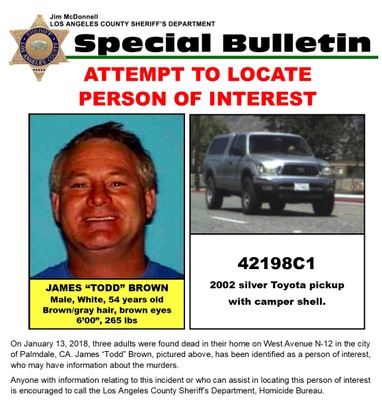 Richard Gardner II, a 78-year-old white man, was pronounced dead on Saturday, Jan. 13, after suffering “trauma to the body” in the 1100 block of West Avenue N12 in Palmdale, according to Los Angeles County Sheriff’s homicide investigators.

The daughter was worried, he said, because she hadn’t been able to reach anyone at the house where her disabled brother, Richard Gardner III, 52, lived with their father and their father’s wife, Pepper Gardner, 56.

When deputies arrived they found the elder Gardner dead in the small, single-level house, Corina said. A short while later, investigators found Gardner’s wife and son dead in another part of the house.

The elder Gardner and his wife did not work outside the home, Corina said. The younger Gardner suffered head trauma when he was younger, leaving him with a slight mental disability, Corina said, “but the son did work. He’d go into town and do odd jobs and wash windows for businesses to make some extra money. He was more like a handyman.”

Corina said investigators believe the Gardners were all killed within a day of when they were found, but they are still trying to piece together what happened, and when.

Investigators released a photo of Brown and his 2002 silver Toyota pickup with a camper shell and license plate 42198C1, and said he has friends and relatives who live in the Antelope Valley and Inland Empire.

Do you have information to share about the life of Richard Golden Gardner Jr. ? The Homicide Report needs your help. Please fill out this form or e-mail us at homicidereport@latimes.com.

Share a memory or thought about Richard Golden Gardner Jr.

Richard was a close friend of mine. Five years ago that man became my friends. We worked together and at that time was struggling life but Richard was always there for me and my family always giving me rides making me laugh with his silly jokes and his manicans. I just found out about this today 3/3/2018 were very sad personally can't understand how a person can hurt defenselive family. We both attended the lds church in las Vegas he will always be my brother. I love you richard 2&3 .

Richard you were an amazing person in life and made us smile and laugh so much that our faces hurt. You will have everyone in heaven goofing around. Hugs friend we will have that hot cocoa in the future.
RIP Richard you will forever be missed.