Rigoberto Arceo: Shot in the chest by a sheriff's deputy 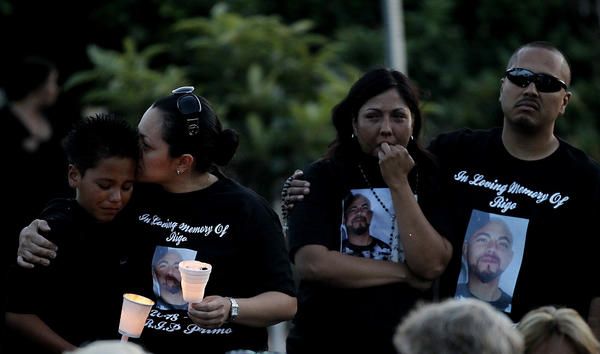 On the working-class Cudahy street where he lived, Rigoberto “Rigo” Arceo, 34, was a staple; known for his smile and wave each time he passed by.

He took that smile with him to the halls of St. Francis Medical Center, where he worked his way up from a janitor position to biomedical technician.

Late on the night of Saturday, May 11, Arceo arrived at the hospital where he had worked for eight years by ambulance, shot once in the chest by a Los Angeles County sheriff’s deputy.

His coworkers recognized him as “one of our own,” said Brother Richard Hirbe, the director of spiritual care and medical ethics for the hospital.

“The heart of the hospital stopped for a moment,” Hirbe said.

Arceo had been dancing to mariachi music at a Mother’s Day gathering at his home just hours earlier. The neighborhood, dotted with pastel-colored stucco homes and duplexes, was bustling, with grills fired up for carne asada, children playing in front yards and music flowing.

About 8 p.m. Arceo’s younger brother left the party with his girlfriend to go a short distance home. About 30 minutes later, he came back and told Rigo that he had gotten into a fight outside his apartment building, said their sister, Maria Arceo.

Rigo and Maria left the party in a dark blue Toyota minivan and drove to the apartment with the hopes of calming things down. But they quickly gave up, she said. By then, someone had called the L.A. County Sheriff’s Department to report a fight involving a man with a gun.

As Rigo and Maria left the scene, deputies were arriving. A deputy followed their van to Walnut Street and Otis Avenue, a few blocks away.

Maria, who was driving, said she noticed a deputy behind her but said she saw no flashing lights.  She and her brother parked three doors away from his house. At that point, Maria said the deputy’s lights flashed and she heard shouts.

The sheriff’s account of what happened next follows: Arceo exited the vehicle, advanced on the deputy and attempted to take the deputy’s gun. The deputy fired a single shot, striking Arceo in the upper torso.

Maria said she saw her brother exit the van and walk toward the rear of the van with his hands up. She heard a gunshot, then saw her brother disappear from the window where she’d been watching.

“His hands were in the air the entire time,” she said.

Deputies then instructed Maria to get out of the car,  she said. She watched as the paramedics removed Arceo’s shirt and attempted to resuscitate him. He was pronounced dead at 10:46 p.m. after arriving at the hospital, according to coroner’s records.

Sheriff’s deputies found a handgun in the van. Arceo’s father is the registered gunowner, according to the family’s attorney, Luis Carrillo.

Less than a week after Arceo was killed, Armando Garcia, 53, stood in his front yard where he had been barbecuing the night of the shooting.

Garcia said he watched as the confrontation unfolded, illuminated by a nearby streetlight. He said he will never forget Arceo’s hands falling as his body slumped to the ground.

“It was about five seconds and they shot, and Rigo fell,” Garcia said. “I got really nervous, I couldn’t believe what I was seeing.”

In a statement given to Carrillo, Garcia’s cousin said she was sitting on the front porch and had the same memory of the event. Carrillo has called for a federal inquiry into the incident. As with all deputy-involved shootings, the district attorney, the sheriff’s homicide and internal affairs bureaus and the sheriff’s executive force review committee are investigating the killing.

At St. Francis Medical Center, those who knew Arceo have a hard time understanding what could have gone wrong. Hirbe, who received a call from the hospital at 11:45 p.m. that evening, met Arceo when he started working at the hospital as a janitor. Arceo, he said, had grown into a employee who reached out to co-workers at the hospital as a role model.

“A lot of the younger guys started to emulate him,” Hirbe said. “They knew that he worshipped his family.”

Yoana Munoz, who was set to marry Arceo in August, said her fiance first attracted her with his “big smile and his personality.”

She said that Arceo treasured their two sons, Nathan, 6, and Christopher, 10 and recently begun coaching his oldest son’s basketball league.

At a vigil in May, Munoz sat in folding chairs with Arceo’s family members, her youngest son in her lap. His sister said that since the shooting, the family has camped out at the site where he was shot.

“We don’t want to leave him alone,” she said.

Photo: Family, friends and neighbors of Rigo Arceo, including his sister, Maria Arceo, second from right, gather for a memorial service on Walnut Street in Cudahy on Friday, May 17. Credit: Luis Sinco/Los Angeles Times

Sorry for the families loss. This could have been avoided like so many other needless deaths by the citizen's actions. When I went through drivers education classes and from my parents instructing me, if a cop gives me a lawful order, do it! If I'm driving and I am pulled over, sit still with hands on the steering wheel. If it's night, turn the dome light on so the cop can see inside my vehicle. Under no circumstances exit the vehicle or argue with the cop. If a ticket is issued and I feel that it is wrong, go to court. Sign the ticket, it doesn't mean I'm guilty, just means that I'll take care of the ticket. Going to try to calm down a fight that just happened may or may not be a good decision, that isn't the issue here. The issue is the individual getting out of the vehicle and advancing on the officers. Absolutely no reason. Medical emergency? Advise the cop once they get to the door, they can either assist or get a squad there ASAP. I wish there was video of this encounter to see if the cop or Rigoberto actually did anything wrong. Someone once told me that cops should all wear a camera because their behavior improves. I think it is the individuals who the cops encounter act better when camera's are worn. (Yes, some of those cops who are Mr. Toughguy (very small percentage) act better when they are recorded, but I believe it is the citizens who show more improvement. I have seen a cop use a camera on students while school is getting out and these students behave better when they know they can't lie to their parent.

They murdered Rigo that night. Period. Justice For Rigoberto.
#endpoliceterror

The police have a burdensome responsibility of law enforcement in an area dominated by people who will not think twice about shooting them, or eliminating them so as to avoid jail time. In a place like this, when a cop says to exit the vehicle you exit with hands up and await their next instruction...never advance upon them with your hands up (it is an aggressive response to advance). You are playing with your life when you are interacting with law enforcement. RIP and prayers for the family.

We really do not know what happened, and we aren't in a position to judge the person who was fatally shot by the police. Whatever happened I do believe he had his hands up and didn't approach the police in a threatening manner. I think the cop was trigger happy and perhaps even intended to shoot the him even though he had his hands up.

You don't know the full story. The media is never one sided, cops cover up their dirty BS. If Bly u knew what went on at the party, and if only you know that the handgun found was unknown to him. Earlier reports were of a "man with a rifle" that's a bunch of bull. You're quick to judge a situation you have no clue what happened in the events prior to this. Look at the Trevon Martin case. You didn't know Rigo, you couldn't possibly know that he was trying to make the situation better. A wrongful killing is still wrong.

If he was going back to start more drama dont you think he would have taken a group of men instead of taking his sister? The gun was found in the trunk of the van unloaded never touched. Which in the state of California is legal. The reason they went back to talk things out is because his other sister patty is neighbors with the guy who started the fight. It called being an adult to fix an issue. Can't wait to see that officer I'm prison for what he has done. Officer was never touched nor near arceo and his sister the neighbors are witnesses.

This story makes no sense. Arecoe's brother tells him he was just in a fight. Areceo leaves a party and drives to meet the guys who jumped his brother "with the hopes of calming things down"? HIGHLY unlikely. It seems like he went there for payback. Sorry to the family either way.

This guy and woman go to "calm down" everything AFTER the fight and by BRINGING A GUN.

The cops get a report about a call of a guy with a gun at the incident. (Sounds like this guy's interpretation of "calming everything down" is waving a gun during a fight.

When stopped by the cops.. he gets out and ADVANCES on the police. Now... the cops get a call of a guy with a gun..they stop the car.. and the GUY ADVANCES on them probably ignoring their orders to stop..

YES you are likely to get shot.

Accountability.. If you do not want to be shot dead by the police.. perhaps you should act responsible.

I wonder why was a gun found inside the van he was riding in?, and was he out to kill someone his self?