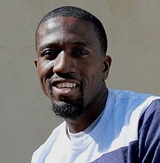 Robert Earl Meekins Jr., a 28-year-old black man, died on Saturday, Jan. 5, after he was shot inside the Gable House Bowl, 22501 Hawthorne Blvd., in Torrance, according to Los Angeles County Medical Examiner-Coroner records.

Meekins was at the crowded bowling alley on Friday, Jan. 4, with his close friend Astin Kyle Edwards, 28, the godfather of his 5-year-old son.

About 11:54 p.m. a group of women began fighting, according to a news release from the Torrance Police Department. The fight escalated to include men and then someone began shooting, The Times reported.

Seven people were struck by gunfire, according to the release. Four were taken to the hospital and survived their injuries. But Meekins, Edwards and a third man, Michael Di'Shawn Radford, a 20-year-old black man, were pronounced dead at the scene at 12:07 a.m.

The cause of death for Meekins was listed as gunshot wounds to his right arm and chest, according to coroner's records.

Family members said Meekins, Edwards and Radford had been trying to break up the fight when they were shot, the Daily Breeze reported.

Meekins, a resident of the Florence area of South Los Angeles, went to the bowling alley that evening after finishing his shift as a maintenance worker, family members said. He had a contagious smile and loved to dress stylishly, his relatives told The Times, and he had  never been in a gang or in trouble with the law.

"He loved his son. He was hardworking," said his aunt, Carol, who declined to give her last name. "He was doing good for himself."

Two days after the shooting, on Sunday, Jan. 6, Torrance police investigators and SWAT officers arrested Reginald Leander Wallace, 47, in the area of 4th Street and Western Avenue in Koreatown, in connection with the shooting that killed Meekins, Edwards and Radford and injured four others, according to a department news release.

On Feb. 14, Wallace was charged with three counts of murder in connection with the bowling alley shooting, four counts of attempted murder and one count of possession of a firearm by a felon, according to a press release from the Los Angeles County district attorney's office.

The charges against Wallace also include special circumstance allegations of multiple murders, killing to further the activities of a criminal street gang and allegations of using a handgun that caused great bodily injury and death, according to the release.

According to the complaint, Wallace was convicted of first-degree murder as a juvenile in June 1989, and later convicted of possessing a gun within a school zone in 1997 and assault with a firearm in 1998.  The Times reported he spent 17 years in prison and was released in 2017.

During a news conference in January, Torrance Police Chief Eve Irvine said the shooting that began as a fight between customers grew to involve 15 people, The Times reported. Wallace pulled a gun from his pocket and began firing into the crowd, Irvine said, adding that it appears he was the only shooter in the building.

Wallace's arraignment has been rescheduled twice, from Feb. 19 and Feb. 28, to March 19 in Room 4 of Los Angeles County Superior Court's Torrance Courthouse. He is being held without bail.

Do you have information to share about the life of Robert Earl Meekins Jr. ? The Homicide Report needs your help. Please fill out this form or e-mail us at homicidereport@latimes.com.

Share a memory or thought about Robert Earl Meekins Jr.