Mother of man killed in broad daylight: 'I just want the person who did this to be caught' 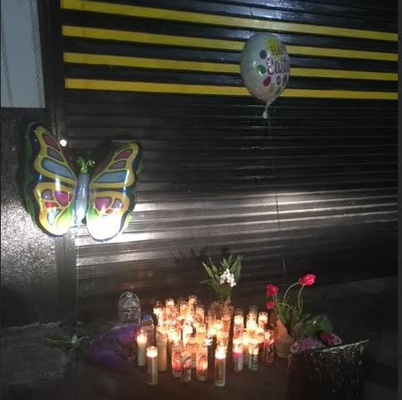 Hours after her only son had been fatally shot, Lenell Ellis drove to where he took his last steps, looking for something to ease her pain.

Ellis stepped out of her car and walked around a row of stores near West 55th Street and South Vermont Avenue.

“Even though it was late, I just had to see where my son had been killed,” she said.

There was no sign that Robert Ellis, 27, had been shot there earlier that day. No candles or flowers, and his blood had already been washed away.

“I just started thinking on my drive home, ‘What a shame that my baby is gunned down here like a dog in the street and they just wash him away like nothing,’” she said.

Police last week released surveillance footage and still photographs of the gunman. The L.A. City Council also recently approved a $50,000 reward for information leading to the conviction of the killer.

“It’s a matter of the right person seeing [the footage] and calling us,” said Los Angeles Police Det. Eric Crosson. So far, Crosson said, witnesses have been reluctant to come forward.

About 2 p.m. on March 25, Robert Ellis had just stepped inside a barber shop in the plaza and walked back out. He was going to come back later for a haircut and started chatting with some people outside.

Surveillance footage shows the gunman in a gray hoodie running up, firing at least seven shots into the group, which included a toddler, and then running away.

From another angle, a surveillance camera shows frightened people ducking and running.

The area where Ellis was killed, Vermont-Slauson, is one of the more violent neighborhoods in South L.A., according to crime data compiled by the Los Angeles Times. In the last 12 months, 10 people have been killed in the neighborhood, according to coroner’s records.

After police released the surveillance footage, Yasha Vand, one of Ellis’ childhood friends, drove to the crime scene and spent about 30 minutes in the parking lot.

“I kind of replayed everything in my head,” he said.

The two had plans to hang out over the weekend, but instead, Vand, a licensed paramedic, spent his Friday night at the hospital at Ellis’ bedside.

“I’ve seen this stuff before. I've been around this field long enough,” he said. “But seeing my best friend intubated and lifeless, it was something I never thought I would envision.”

In the days before Ellis was killed, he shared with family and friends that he was going to be a father and asked a longtime friend, Haneef Munir, to be his child’s godfather.

Munir and other friends described Ellis as an outgoing man who made friends wherever he went. He was looking for a job and hoped to one day start a clothing line or obtain his barber's license.

Crystal Baires, Ellis’ girlfriend, said he already had names picked out for their child. In hard times, he encouraged her to be positive.

“Any problem I had with my family, school, I would always go to Robert first. He would always bring me up,” she said.

Throughout her children’s lives, Lenell Ellis made an effort to keep them out of violent or dangerous neighborhoods. Aside from her full-time job as a sales representative, she also took side jobs, “so my kids could have everything they needed.”

Robert Ellis had recently moved into his late grandmother’s home, a few blocks from the shooting, to help his mother clean it out and sell it.

“I feel like I sent my son back into the murder zone,” she said.

Now she draws upon memories of her son, like the time last year when she threw him a surprise birthday party at a BJ’s restaurant in Torrance with a group of his closest friends from high school. Or how in 2006, when he graduated from Torrance High, she bought him a gray Ford Mustang that matched his sister’s car. He reacted with surprise.

“I just know that I’ll never ever be the same again,” she said. “I just want the person who did this to be caught.”

This weekend, Lenell Ellis will distribute reward fliers all over the city, an effort she says will continue until there’s an arrest.

The day after her first visit, she went back to the scene. This time, she took candles and flowers and placed them on the ground.

The Los Angeles Police Department released the above videos, taken from surveillance cameras at the scene of the shooting.

Theres a personal security device called Occly that has 4 cameras, nearly 360 degree coverage- could have really helped in this situation in capturing the killer.

— G. E. Diego ; before going out and doing some street justice, please go to your local library and check out the movie "The Ox-Bow Incident".

Several years ago in a poli sci class I was taking, I told the instructor that when more and more people see street justice as an acceptable option, it is a danger sign that the criminal justice system is failing. And that isnt a good thing.

It is time for responsible citizens of the greater Los Angeles area to form vigilante groups to counter this maddening wave of crime that is making our region unsafe to live in. People can no longer walk our city streets without the possibility of being robbed. Cars are being stolen and or broken into daily. Homes are being burglarized and women are being raped and disrespected at alarming rates. The thugs must be brought to some sort of justice. The police are ill-equipped to counter this siege with in our region.
We are letting petty criminals out of jail and prisons, and they turn around and commit more serious crimes, preying on the innocent citizens of our cities. Our elected officials have failed us we must act to end this pillaging of our homes and businesses.

Note the 1st video at the top. At the top of the video, two men standing by trees, start running. It appears that these men, as they were 'hanging out', probably live very close by. One man has a very distinctive gold and white jacket.

I wonder if one of those men knows anything, or saw any car driving away and etc.

My heart is forever broken. I just don't understand why anyone would take the life of another. This attack was totally unprovoked and cowardly. What a terrible world we live in that even the parents of this terrorist (yes I liken gang members to terrorist) sit silent and do nothing. Robert had a bright future ahead of him. Does the killer's future look the same? Please if anyone has any information that will lead to the capture and conviction of this heartless young man please come forward, your tip can be anonymous. The longer this killer is at large the greater the chance you, or your loved one coming face to face with him.

This is another example of another brother gone plum loco, this Guy is either stupid or just plain satanic. wathching him on video shoot 7x's into the group just lasughing, talking enjoying the day which included a child is a sad commentary 2 some of the children brought n to this world. How have these children turn out 2 b vicious murderers is beyond me. Mever in my most stupid thinking would I grab a gun n just carelessly shoot into a crowd of people, I wonder when he woke up that morning did he envision taking someone's life n destroying the hope n dreams this young man had. Perhaps if he had dreams n goal's n the willingness 2 change I wouldn't b typing this sloem message of anger, discuss n just plain sadness that some of our black , white , haispanic, Asian son's r so heartless. I pray for all those who witnessed this tragedy n person that God would comfort u n open your heatrs n mind 2 see "WE GOTTA STOP THIS S***. N 2 the parents of these fallen abgels U had better get busy praying n calling them on this isanity of gang-baggin n STOP be ing n enabler of this Bull***, This youngman has strayed away from Love, N kindness n repect 4 other n himself. if his parents r alive n see this video n don't turn his ass n then the blood of this youngman is on there hands n those that knows him, n know what he did, n they're no different then this devil child that he is.Somebody turn this asshole n r u your brother , nephew, uncle or God forbid your father will b next.

My prayers go out to this young man's family and the most deepest to his mother, I know that heartache oh so well peace and serenity, may you find some kind of healing thru this tragedy oh I wish how these people are persons can know the pain that they are causing by committing these heinous acts upon our families. God bless to the family! So very sorry for your loss and pain.