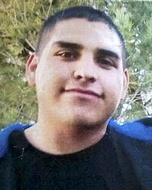 Robert Garcia, a 22-year-old Latino, died Friday, June 29, after being shot in the 13500 block of Norwalk Boulevard in Norwalk, according to Los Angeles County coroner's records.

The shooting took place late Thursday night. Garcia ran from three men who approached him to a nearby business, according to the Los Angeles County Sheriff’s Department.

One of the men followed and shot him in the upper torso from close behind, authorities said. All of the suspects remain at large.

Detectives were investigating the motive behind the shooting. Anyone with information is asked to call the sheriff’s Homicide Bureau at (323) 890-5500. Those wishing to remain anonymous can call Crime Stoppers at (800) 222-8477.

Share a memory or thought about Robert Maurice Garcia

Roberts family needs to tell who was after them instead of worrying about being rats! how bout you guys stick up for him for once and say what you know! Robert wasn't the gang bagger!

Dang i miss you so much Robert life isn't the same without you. your were the best cousin ever with the brightest smiles<3
Everyone misses and loves you so much robert and hopefully we will see each again one day in heaven. i know you are watching down on all of us. the guy that shot you will hope fully be found because he deserves all the worst punishments because he killed a young handsome innocent man that had a bright future ahead. ihope that the guy will relize and stop being a little bitch and stand up like a man because if he didnt pull that trigger then the family wont be suffering without you we love you<3

ripsmokes ...i remeber when we met homie smokin and tokin... you took me, my moms to riverside and did a mission.....

7.62x39 is the caliber for the infamous ak 47 why dont you censor that comment also? I think its promoting more gun violence.

I love you Robert. We'll see each other soon.

Robert was always a gentleman. I first met Robert as a kid and he loved hugs and being around his mom and siblings. I pray that the people responsible for this crime will be caught and pay for their horrible actions. No one has the right to take someones life. This young man graduated from high school and loved his family. He's definitely in the best place ever, with the Lord. RIP, mijo.

I knew Robert and Timothy they were both good kids that were born into a dysfunctional family. I love you Robert. His brother isn't a punk ass or a low life thats you 7.62x39. God curse you.