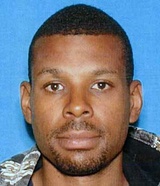 Shortly before 12:45 p.m., Hollie was approached by two black men in a dark-colored vehicle. One of the people in the vehicle opened fire, striking Hollie in the upper torso, according to a news release from the Long Beach Police Department.

Hollie was taken to a hospital, where he was pronounced dead at 1:31 p.m., according to coroner’s records.

According to the Long Beach Press-Telegram, Hollie was married and had two young children. He enjoyed football and at one time served as a deacon in training at his local church.

Share a memory or thought about Robert Lee Hollie