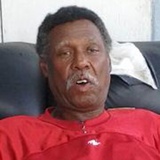 A 61-year-old black man was stabbed to death Tuesday, Aug. 18, in the 14500 block of South Harris Avenue in East Compton. The man, whom friends identified as Robert Ringer, was talking with friends after 7 p.m. at a house where he occasionally stayed and frequently performed odd jobs for an elderly woman.

“It was a typical night for us,” Darrell Ferguson, a friend of Ringer, said. “We were just laughing and horsing around. And then randomly, things got out of control.”

“I heard them arguing. But then I heard Robert holler out,” Stacey Ferguson, 30, said. “I opened up the back porch door and saw her stomping on his face.”

“She was yelling," he continued, "‘You’ll never disrespect me again.'"

Annis tried to leave but Stacey Ferguson’s cousin held on to the woman until Los Angeles County sheriff's deputies arrived. Annis was booked on suspicion of murder Wednesday and is being held on $1 million bail.

Ringer was pronounced dead at the scene.

Ferguson said he had never seen Annis and Ringer have a serious argument and was surprised by the violence.

“They used to play-argue over stuff like pens or seats, but I had no idea that she would take it that far,” Stacey Ferguson said.

Darrell Ferguson remembered Ringer as a helpful handyman who could always be counted on.

“He was just someone who you could talk to," he said. "Even when something was bothering you, you could talk about something else and feel better by the end of the conversation. He was a good person to have when you were going through stuff.

Do you have information to share about the life of Robert James Ringer ? The Homicide Report needs your help. Please fill out this form or e-mail us at homicidereport@latimes.com.

Share a memory or thought about Robert James Ringer

rest in peace robert you sure will be missed old time buddy from the neighborhood bless the ringer family. love from the mayberry family.

Classmates at Compton High very nice person and friend funny will be missed my Prayers go out to his family.

RIP Robert Ringer. Larger than life when he was amongst us. Now his memory is larger than we can only imagine. It's not about how you die but how well you lived that counts. Robert made every minute count and we are all better off for knowing him and his entire family. Thanks for the memories.

I have known the Ringers for many years. I was so sorry to hear about the passing/death of Robert. He was a very unselfish man. I, along with my family, offer our condolences for the entire family. May the Lord bless you, for He knows your pain and sorrows. We send prayers and strength in your time of need.

My BFF from high school just told me the tragic news about Robert! What a senseless way to take the life of such a Larger than life man! He was always cracking witty Little jokes and spoke his mind ! Whenever anyone bothered us we told Robert , he handled it ! We spent lots of time on Cliveden st, with Raynard , Robert , Eddie and Mrs. Phillips! Mama Lilly chased us from there with a belt several times lol - I'll miss you Robert !

Rest well my strong brother! You were always a friend, a teammate, the epitome of strength, and fair dealing. Strong when you had to be strong, and empathetic when you sensed the need. Nobody delivered a blow like you did from that linebacker position, and no one was more eager to defend a friend than you. We love you bro! Your indelible spirit lives on. I'd like to think that God just drafted Himself one helluva ballplayer.

My brother will be truly missed. Eddie and I was just talking about how as we were growing up we were either at their house or they were at ours. My brother Jeffrey and he can now swap stories in heaven. God bless you and your family.

I just heard the devastating news today...
My heartfelt sympathy to Roberts' family.
May the many wonderful memories of Robert sustain you, and may the kind words from his friends lift your hearts. Be blessed...
Linda D Richardson
(Compton High Class of '72)

I haven't seen Robert since Compton high 1971, but I remember him as being a for real dude. Rest in peace Robert.

I grew up with the Ringer family, spent many summer nights at the house, helped out at the cleaners. Robert sometimes would let me ride his mini bike. Remember times at west part playing strike outs and over the line.

We have lost a good brother, Robert was considered as my brother alone with Eddie and Renard.

Many blessings to Robert kids, with love.

My sincere heartfelt condolences go out to the Ringer family. May Robert's soul rest in peace!

I knew Robert Ringer from Compton High School. He was a very nice young man. He was a year ahead of me but his friendship was priceless. The Lord has gained a true angel. One candle has just been blown out. To the Ringer family, you have my deepest condolences. Much love to you all!!

Thank you for your reflections about my dad. Even in the face of this challenging moment, your short eulogies are encouraging and inspiring to me.

I grew up with all the Ringers. His brother Eddie and I are the same age, Robert was year ahead of us. Renard was the oddest. What I most remember about Robert Ringer was his uncanny sense of humor, straight shooter and a good friend to have. My other fond memory was that the Ringers were the first to have the Rupp Mini-Bikes I think Robert had the metallic blue. Then my dad brought me one. The Ringers and the Thomas's were the first. With the Robert and Eddie being first to have them. Then Robert had the first Yahama Motorcyle and then my Dad bought me one. When I reflect on how fragile life can be. It is good to grow up with friends who were loyal and had substance. Robert Ringer was loyal friend to many that knew him and he will be missed! But I know we will see him again in Heaven!
Elder Marion J. Thomas,II

To the family of Robert Ringer you have my heartfelt prayers. Remember the great times we experienced with Robert he was truly a gentleman and although he had a horrifying death GOD takes ANGELS first. Love from houston,Texas class of 1972 Deborah Chenier

For the ones who only knew robert in his adult life, you miss it. i have known robert for more than 50 years. Growing up knowing the ringers it was like knowing rap star, he had everything and was willing to share with close friends. from mini bike,gocart,motor cycle,all kinds of cars and the nice house he had in Lynwood. Rob was my brother, rest in peace. God bless ,Chuckie

People should understand that someone disrespecting you is wrong . It may not be the best solution to harm them and take their life because a bad decision making , can result in a heavier burton than the disrespect receiving from a person whose disrespecting you. This store is a prime example. There were no winners , just a lost of life and pain cause to many. I know sometimes we must take a Stan , but we need to really make good choices . We need to pray to Jesus for answers. Please text me back if you will be able to attend
I remember this brother in school and this story breaks my heart. Let's continue praying for people.

I temember Robert Ringer as an older home boy who used to come on Broadacres in a nice low rider. I was so young, but i remember him.

My deepest sympathy to his family and friends.

This comment is for those who didn't
know Robert but may have read the article with an assumption.Well RR was
SOMEBODY.A kind man who was the
first in our group to have pressed clothes
and the finest car.Many women of stature
sought his attention.A fine athlete on
Compton Highs championship football
team of class of 1972.At a recent park
gathering he was the life of the event.
We who knew him are better people
for knowing Robert.Long live the King.
Love Always, Ricky Terrell