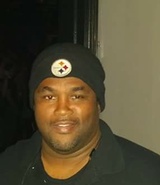 Ronald Eric Broadnax, a 50-year-old black man, was shot and killed Wednesday, Feb. 14, in the 4500 block of Santo Tomas Drive in Baldwin Hills-Crenshaw, according to Los Angeles County coroner’s records.

Broadnax was standing outside a two-story apartment complex about 12:41 p.m. when a man approached from a nearby alley and began shooting at him, said Los Angeles Police Det. Dave Garrido.

Broadnax tried to run away, but collapsed nearby. He was pronounced dead at the scene at 12:51 p.m., according to coroner’s records.

Do you have information to share about the life of Ronald Eric Broadnax ? The Homicide Report needs your help. Please fill out this form or e-mail us at homicidereport@latimes.com.

Share a memory or thought about Ronald Eric Broadnax

R.I.P Devil...damn i was busted for a while, didnt even know my friend was gone until today...they killed him on his birthday...my head Is all fucked up...I LOVE YOU MY NIGGA NOW AND FOREVER

I have known Ron over 25 years. He was a transplant from Pennsylvania and was never a gang member. He was a gentle soul. A loving and caring individual that always looked out for you. He was loved by many people from all walks of life. He was a staple at Whisky A Go-Go as he was a bouncer there and well loved by patrons and the owners alike. The souless coward who killed him, on his Birthday (and Valentine's Day) will never know how his loss affects hundreds of family, friends and loved ones all over the world. I pray they find the S.O.B. that took him away from us. R.I.P. Ron. We love you...Always💜