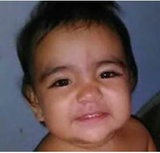 Rosario Torres, a 1-year-old Latina, was stabbed to death Friday, Oct. 21, in the 13100 block of Van Owen in North Hollywood, according to Los Angeles County coroner’s records.

Torres then set a small fire, stabbed himself and jumped out a back window. When police arrived, a kitchen knife was still in his body.

Torres, who also had a knife in his waistband, refused to comply with officer’s commands, Carmona said.

The girl was taken to a hospital, where she was pronounced dead. Torres was charged Oct. 25 with one count of murder, one count of assault on a child causing death and one count of arson, according to a complaint filed in Los Angeles County Superior Court.

Family members told police that Torres may have been  under the influence of methamphetamine, Carmona said.

Police said Torres, who underwent surgery for his stab wounds, is being monitored by police as he recovers.

The killing stunned residents of the apartment complex. Neighbors walked around the courtyard the next morning and talked in hushed tones as a family set up chairs and tables for another girl’s birthday party.

The smell of ash hung in the air, and behind the complex was a pile of scorched belongings, among them a pink bike and a pink chiffon dress. In the courtyard near a statue of the Virgin Mary, a black-and-white photo had been added of a smiling Rosario in a white dress.

Geraldine Calvillo, 28, said she had just seen the child playing in the courtyard Thursday night. Calvillo said the killing is upsetting. Her daughter, whom the birthday party was being held for, is the same age as Rosario.

Alyson Aspe, Velazquez’s granddaughter, who also lives next door to the family, said she was at school Thursday when her grandfather called her with the news.

Velazquez, along with the child’s cousin, rushed back to the apartment but couldn’t get past the police tape.

“I was shocked,” she said. “I just carried the baby the day before.”

Aspe said that the family was generally quiet, but the mother and father “would fight a lot.”

Rosario, she said, was a shy, serious baby who warmed up only to people she knew well. Aspe, who has lived at the complex for about six years, said that the area is normally safe.

She said sometimes, gang members hang out in the alley, but nothing like this has happened.

Carmona said the case is tragic.

“It affects officers; it affects everybody,” he said.

Calvillo said that when she last saw the child, the girl had fallen off her bike and had started to cry. Her father was nearby, comforting her. He told her everything would be OK.

Do you have information to share about the life of Rosario Torres ? The Homicide Report needs your help. Please fill out this form or e-mail us at homicidereport@latimes.com.

Omg this is so sad. I've never heard of so many toddlers being stabbed. Who stabs a toddler? Until I came on this blog it was unheard of