Connie Parson was inside her Willowbrook home last Thursday when she heard fireworks. Then, she heard gunfire.

Parson’s first thought was that there was a drive-by shooting happening nearby. But when she rushed out her back door about 7:30 p.m. June 6 and peered out the back gate, she saw two Los Angeles County sheriff’s deputies with their guns pointed at a white car.

“The way they were shooting, you would think they were in a war with someone else,” Parson said. 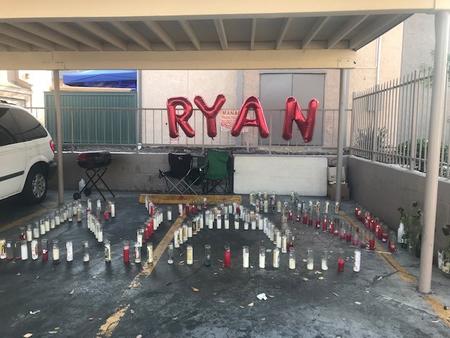 Ryan Twyman, 24, was sitting in a vehicle with another person in an apartment complex parking lot near East 132nd and South San Pedro streets when deputies said they made contact with the males, according to a statement released by the department.

“During the contact, a deputy-involved shooting occurred,” the department said in the statement. It remains unclear what prompted the shooting.

On Friday, the Sheriff's Department released a statement expressing condolences to the family and friends of Twyman. The department did not provide additional comment regarding the circumstances of the shooting.

People who gathered at the scene of the shooting said that Twyman was shot more than 30 times, but the department did not provide information regarding how many times he was shot.

The Game, a rapper from Compton, which borders Willowbrook, posted about the shooting on his Instagram page.

"This is a sick pattern & happens way too often these days," he wrote.

The Sheriff's Department statement said, “We understand many in the community are upset by Mr. Twyman’s passing and we empathize with their concerns about his untimely death.”

The fatal shooting was one of three in a single day by sheriff’s deputies.

Brian Dunn, an attorney who is representing the family of Twyman, said he plans to file a claim for damages against the department, a precursor to a wrongful death suit.

Dunn said that it’s troublesome that deputies may have shot into the vehicle where Twyman was sitting.

"There are no circumstances that would justify shooting into a car unless there is an active gunfight going on,” he said.

Dunn said that Twyman was simply sitting in the vehicle, unarmed.

"We don't think there's going to any way that the department will be able to justify this,” he said.

On Thursday afternoon, a group of people gathered outside the apartment complex where Twyman was shot to raise money for his children. The family has also set up a fundraising page.

Family members held signs proclaiming “Justice 4 Ryan Twyman,” and some wore shirts that proclaimed “It Could’ve Been Me.”

Lexus Twyman, a cousin, said Ryan Twyman grew up in the area and came from a large, close family. He was the youngest brother of three, and had two younger sisters, as well as children of his own.

Lexus Twyman said her family was devastated. Her cousin’s young children, whom he liked to take to the park and the movies, will now grow up without a father, she said.

Near the shooting site, candles spelled out “Ryan” and people spoke in hushed tones as they moved around.

Ceddy Mack, 30, said he lives in the complex and that he recently had an encounter in which deputies walked up to his car and opened the door, without asking any questions.

“That’s common for them to do that,” he said. “And there’s nothing we can do about it.”

On Friday, Parson stood on her back patio, about 50 feet from where Twyman was shot. She said at the time of the shooting, children were playing in a grassy area close to the parking lot.

She said the barrage of gunfire sounded like “Armageddon,"  but didn't know how exactly many shots were fired.

“It was too many for one person,” she said.