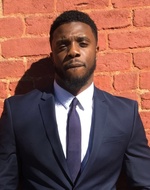 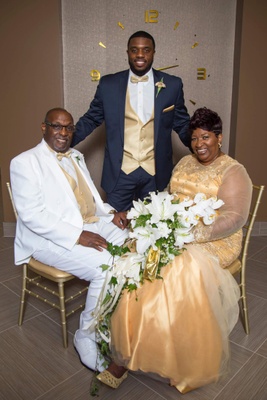 Samuel Isaac Ferguson, a 27-year-old black man, was fatally shot on Friday, Aug. 17, 2018, in the westbound lane of the 91 Freeway near the Artesia Boulevard exit in Gardena, according to California Highway Patrol investigators.

Prosecutors are calling Ferguson's shooting a hate crime, committed because of his race, along with three other shootings between Aug. 17 and 23 last year that killed a second man and injured three in the Inglewood area.

All of the victims were black, according to Ricardo Santiago, a spokesman for the Los Angeles County district attorney's office. The accused shooter, Daniel Martinez, a 30-year-old gang member from Inglewood, is Latino.

Ferguson, a speech pathology student at Cerritos College, was driving home about 4:25 p.m. when he was shot on the freeway, said Lt. Laura Hill.

Investigators have not released many details about the shooting except to say that Ferguson was alone in his car and taken by ambulance to the UC Irvine Medical Center.

Hill said investigators aren't aware of any incident that preceded the shooting. She said Ferguson's car, a white Nissan Sentra, was struck by multiple bullets, but she refused to release any other details because the case is still under investigation.

The CHP has put a security hold on Ferguson's case, meaning the Orange County coroner cannot release any details about his autopsy.

Hill said Ferguson was pronounced dead at 5:22 p.m. The cause of death was listed as a "through and through gunshot wound" to the chest, she said, which perforated his aorta, atria and both lungs.

Martinez, the accused shooter, has been charged with two counts of murder in the fatal shootings of Ferguson and Alhmond Sherrick Ugene "Juice" Davis, 27, on Aug. 20, 2018, three days after Ferguson was shot.

Davis was standing outside his Inglewood apartment talking to two friends in the 900 block of West Beach Avenue around 5:25 p.m. when a vehicle drove by and someone inside began shooting. All three men were struck by gunfire and taken to the hospital. His friends survived, but Davis was pronounced dead at 6:12 p.m.

Martinez, who was arrested by Inglewood police the evening of Aug. 23, 2018, has also been charged with multiple counts of attempted murder in the shooting of Davis' friends, another shooting in Los Angeles on Aug. 19 at three people who were not injured, and a shooting in Inglewood that morning that injured a male driver who was waiting for a traffic light to change at the corner of East Hyde Park Boulevard and West Boulevard.

Prosecutors allege that Davis and Ferguson "were intentionally killed because of race," and that all of the shootings should be classified as hate crimes. Martinez pleaded not guilty to all the counts during his second arraignment on Aug. 12.

A trial date has not yet been set, according to Santiago. Martinez's next court hearing is scheduled for Sept. 23 in Department O of the Los Angeles County Superior Court's Compton Courthouse.

Ferguson was the youngest of nine siblings and had no gang affiliations, according to his older sister, who asked that her name not be used because she is afraid of retaliation. He grew up in Lynwood and played varsity basketball at Mayfair High School, where he graduated in 2009, she said.

He went on to play for two years at Navarro College in Corsicana, Texas, where he earned his associate's degree, and then played college ball for another year in Oklahoma before returning to California. Ferguson's early goals may have been to play professional basketball, she said, but when he came home, he put all his energy into becoming a speech pathologist.

The evening he died, Ferguson was returning home after working with one of his young clients, she said.

"He really had a heart for others," she said. "He was respectful to seniors and the disabled ... and just always looking out for other people."

Ferguson's mother, Marilyn, had a history of heart problems and just seemed to decline after her youngest died, his sister said. She was in the hospital on Dec. 12, the day Martinez was charged with the murder of her son, and died the following day.

"We are a very close-knit family," she said. "Our parents were married 51 years, with nine children who were all raised in the same household. But you can just lose your drive, your motivation to live and this ... this was quite heartbreaking."

The shootings are still under investigation. Anyone with information is asked to call the CHP's Investigative Services Unit at (323) 644-9550. Those wishing to remain anonymous should call Crime Stoppers at (800) 222-8477.

Photo: Samuel Isaac Ferguson poses with his father, the Rev. Donald Ferguson and his mother, Marilyn, during a celebration for their 50th wedding anniversary in 2017. Samuel Ferguson was shot and killed on the 91 Freeway on Aug. 17, 2018, as he was driving home from work in what prosecutors are calling a racially-motivated hate crime.

Do you have information to share about the life of Samuel Isaac Ferguson ? The Homicide Report needs your help. Please fill out this form or e-mail us at homicidereport@latimes.com.

Share a memory or thought about Samuel Isaac Ferguson

Sam is my uncle and i love him so much it hurt me because he isn't gonna see me go to college or end high school. I am now 15 and Sam and me were close. Why shoot him when he was good man doing nothing to nobody. He doesn't deserve this at all only because off racism. Isn't it time to be who we are and not judge of people personality it is not right and is not safe to us. Like Steve Patrick Morrissey says " Racism is beyond common sense and has no place in are society"

Anyway I can get in contact with the family to send condolences? I grew up with him in elementary school. Wish I would’ve kept contact.

Iam just now discovering this heartbreaking tragedy and Iam just so hurt by what has happened to this wonderful family. I have known both Don and Marilyn long before they were married, we were very close however, I have been disconnected for some time.I love them with all my heart and I hope that they can find closure as they look to their children and the many friends they have. God bless with love,
John R. Rupert (323)303 8974

I want to hurry up and get my boys out this place. I refuse to lose mine over stupid, senseless animals out here.

To Kaitlynn;
while gun control is an issue in our country, racism is the reason this promising young man is dead. what we should be looking into is what fueled daniel martinez to drive around and seek the murder of black men? instead looking at weapons, we should be controlling the poison that's in the hearts and minds of people killing people in racially motivated attacks. why does he feel the need to kill? I'm hoping martinez gets due justice, but the reason for him to hate someone he's never spoken to needs to be addressed. he's not the only person with that mentality... it needs to be explained and dealt with so sad stories like this become rare instead of common.

This is among the saddest of the stories on this site. I'm working on compiling material for a project on gun control measures and check the homicide report from time to time. What a good person, full of potential and intention to help others just robbed of everything, and us robbed of their contributions. The mother died of a broken heart. So sad.