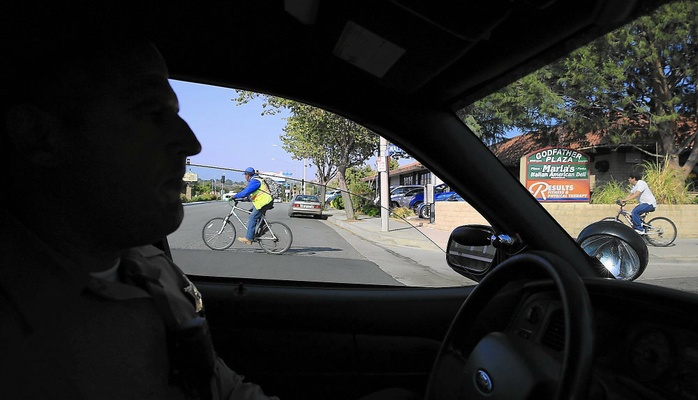 The 911 caller reported a commotion in a yellow home with gray trim in Canyon Country one evening last month. When deputies arrived, they found an elderly man in the garage. He had been beaten to death.

The man, a 74-year-old named Jack Miller, became the seventh homicide victim this year in the city of Santa Clarita and its unincorporated neighborhoods — an area that is consistently rated one of the safest in the nation and is known for attracting families looking for good schools for their children.

In previous years, the area usually saw two homicides at most. In 2011, it saw six, according to coroner and law enforcement data compiled by The Times.

The majority of the killings this year have involved romantic disputes or ones involving family members. (One case involves a drug overdose that led to a murder charge.) In Miller's case, his son has been charged with murder.

"This is such an anomaly for Santa Clarita," said Gail Morgan, the city's spokeswoman. "I have worked for the city for 25 years, and I have never seen anything like this."

An infant and a newlywed are among the dead so far this year.

In January, Ellorah Rose Warner, a 3-week-old girl, was found dead in a truck outside an apartment complex in Newhall. Her father has been charged with murder, sexual assault and torture.

In late May, Courtney Arvizu, a 25-year-old who had recently married, was found dead in her Newhall apartment. Her husband, Robert Arvizu, 48, has been questioned in the killing but has not been charged; he is being held in the Men's Central Jail on an unrelated charge.

In early May, Ledarion Allen Jr., 21, was killed and a woman wounded after her boyfriend allegedly opened fire on the two in a dispute, according to sheriff's officials. The boyfriend has been charged with murder.

On Feb. 8, Johnnie Greenback, 28, was killed and his father was wounded in a family dispute in an apartment in Santa Clarita. Jessica Greenback, 25, has been charged with the murder of her brother and attempted murder of her father.

In the last few months, Capt. Roosevelt Johnson with the Santa Clarita Valley sheriff's station noticed the surge in killings. He put together a working group to help find strategies and solutions to address the violence.

"Any death is tragic," he said. "Our goal is to try to prevent it if we can."

The department is looking to partner more with the Domestic Violence Center of Santa Clarita Valley. Representatives will go on ride-alongs with deputies and work with detectives on individual cases. In addition, a representative from the Child and Family Center, a nonprofit mental health clinic, now works regularly with patrol deputies and detectives.

Starting later this month, deputies also will partner with a county mental health clinician to respond to specific calls. The program will deploy teams to northern Los Angeles County.

Carl Goldman, who moved to Canyon Country 25 years ago, said he has seen the area change from a bedroom community to the county's third-largest city. Goldman, who owns a local radio station, said he's confident that the city's leadership, along with nonprofits in the area, will combat the domestic and family violence problem.

"It's part of the growing pains of the valley," he said.

On a recent afternoon, Deputy Brian Heischuber dealt with more typical Santa Clarita problems as he drove along tree-lined streets.

At one point, he got a call reporting a business dispute between a landlord and a tenant in a shopping plaza.

Leon Lancaster, 70, who witnessed the dispute, told Heischuber what he'd seen. Lancaster, who knew the deputy by name, moved to Santa Clarita from Sun Valley 28 years ago to escape crime.

"The deputies, I'm telling ya, they do a great job," he said. "Very seldom do you have something that lingers on."

After leaving the shopping center, Heischuber was called to a complaint of a person cutting down trees on Forest Service land in Saugus, a hilly stretch with ranches and horses.

"Most of these incidents are isolated," he said. "Everywhere you go, you're going to get some problems."

Ledarion, my brother ,was my mothers first child and just being in his presence brought a smile to your face. Questions will alway wander my mind of why someone would do something so cruel to someone with such a good heart. I miss him so much.. And Hope justice will be served for my brother.

This is a response to criminal attorney Ralph Goldsen about how school programs can make a difference.
Student's problems at home (poverty or violence at home) or disabilities or mental conditions (that negatively impact violent tendencies) affect how students react at school.
Local School Districts and Police have to effectively and appropriately deal with the bullying situation.
IDEA laws, Civil Rights laws, and Criminal laws dictate how the School Districts should respond, remediate the deficits. However, they are not following the law.

Student Bullying (both physical and psychological) at SCV schools are prevalent and growing.
When I called the SCV police station about repeated and serious student bullying against my child, the SCV police claimed it's a School District Administration issue and refused to deal with it.
When I wrote & called the school principal and the SCV school district principal and administration responded with denials, limiting what happened, deflecting, intimidating the parents with letters from their attorney.

School Districts are mandated to appropriately in service regarding bullying but they do not do this.
This is the problem.

We are residents of Santa Clarita since 2002 and have seen an increase in crime... I agree with uncle vito; how about the Santa Clarita Sheriff Department issuing CCW permits (Concealed Carry Weapon) to law-abiding citizen for self-defense?

SCV sheriff department is a trash bag. They never show up when you call them. I got my car broken in and they made me wait 4 hours to come and do a report, that's ridiculous, and I've emailed them about the crime raise before that happened. They don't give a shit until some cop get killed here.
Even though with the proposition 47, they had time to get ready and make a plan for that, that's just an excuse to not do their job.

The deputies here never show up when called. My husband and I, and many neighbors have called repeatedly about ongoing issues in our neighborhood with graffiti, vandalism, and blatant drug use by young people on our paseos. They hardly ever come out, sometimes they'll show up an hour or two later and just drive through the neighborhood without even stopping. Recently we phoned in a crime IN PROGRESS (people smoking dope in a fire danger area and spray painting graffiti), you could see them doing it from the street! One cowardly dep showed up, wouldn't confront them alone, told me he had to wait for another car, didn't keep track of the suspects while he played on his iPad, another carload of criminals showed up, saw him and texted the other group who took off. All of this we saw and the dep didn't. When I told him the suspects had already left, he said, oh well that's a good thing! Yeah, great if you're a coward who doesn't want to work, or great if you don't live in the neighborhood being targeted. Unreal.

As a criminal defense attorney for 35 years, I have a sense that crime rates in any given community are connected to demographics, socioeconomic shifts, and the expectations of residents and their children. So in economic downturns, gang presence increases,drug use, acts of desperation by people losing their houses, and so forth. None of these explain Santa Clarita. It began as an ex-urban alternative to the north valley where people could achieve the American dream. I worked for Pardee Construction back in 1972 and I saw a beautiful master plan that held on for 40 years and attracted committed hardworking people. I wish this article made an effort to connect the effect - rising crime - to some cause. Surely someone in the city government has an idea of what has gone wrong. Police alone cannot control the crime rate. School programs can make a difference. If we knew why Santa Clarita was sinking, we could do something to lift it up again So let's dig a little deeper, LA Times journalists.

yep,those white drug offenders are the first to get out...and they already have guns and withdrawal symptoms...bad combination

As tragic as this situation, it's not as bleak as could be. The upside is that none of these murders appear to be street crimes. After seeing the headline I feared at least a few of them could be street-related murders.

Rise in crime is due to prop 47. By a household firearm and defend yourself.

I have called the sheriffs office in Santa Clarita twice this year. The first time they never showed up the second time it took 2 hours. They need 30 more officers out here. They NEVER do a single thing if you can even find them. Ridiculous.