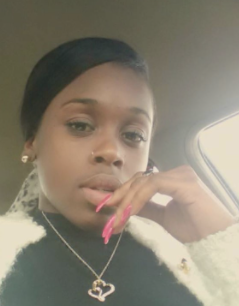 Brown was waiting at a red light at an intersection about 11:15 p.m. when a person riding a "homemade-style minibike" pulled alongside her car and began shooting, a Los Angeles County sheriff's detective wrote in an application for a search warrant.

The warrant, written by Det. Arthur Garcia, was filed in a Compton courthouse in late August.

Brown, the driver, was shot in the head. A man sitting in the front passenger seat suffered a graze wound to the head, and a girl sitting in the backseat — identified by Brown's cousin as her 2-year-old daughter — was unharmed, according to the warrant.

Brown was pronounced dead at the scene at 11:25 p.m., according to coroner's records.

The assailant, who was wearing a camo-print jacket, a blue hooded sweatshirt and dark jeans, fled north on Dwight Avenue, the warrant said.

Authorities searched the homes of four boys and young men, but it’s unclear whether any arrests were made.

In interviews, Brown's cousin and best friend said they could not think of anyone who might have wished her harm. They believe Brown, a mother to two young girls, was killed randomly.

"People don't know what they're doing out there in the streets," said her cousin, Koree La Flora. "That person didn't know that they took out a mom, that those two girls don't have their mom."

Brown grew up on the east side of Long Beach, graduating from Long Beach Polytechnic High School in 2012, La Flora said. She had two daughters, ages 8 and 2.  "That was her thing, being a parent," La Flora said. "Taking care of her kids, her nieces."

Brown worked as a healthcare aide at a Bellflower facility for people with disabilities, said her best friend, Heaven Thomas, who worked at the same facility. Although she worked nights and Brown staffed the day shift, Thomas said she often stayed past her shift to spend time with her friend. The two bonded over the fact that they were both young, single mothers.

"She was one of the bright lights in my life," Thomas said.

The healthcare work was taxing, however, and Thomas applied to work as a bus driver. She persuaded her friend to put in an application as well. The two were hired by a company that contracts out drivers to public transit agencies, Thomas said.

Brown drove a route for the DASH that went through Watts and Lynwood. She was saving up to buy a vacant home on Alondra Boulevard in Compton that she planned to fix up and make her own, Thomas said.

The night of June 14, Thomas recalled, one of Brown's cousins called her and said she'd been shot. Thomas didn't believe it, not until she got to the crime scene. "Yellow tape only means one thing," she said.

Thomas saw her friend's mother crying on her knees. She heard a police officer say they were waiting on homicide detectives to arrive. She told a neighbor she needed to know what had happened.

"You don't want to see her like that," the neighbor told her.

The way Brown died is impossible to square with the way she lived, her cousin said.

"I hate that that's the nature of the crime," La Flora said. "I don't want her to be looked at like this. That wasn't how she lived; that wasn't her, not at all."

Share a memory or thought about Shaylaah Rochelle Brown

On this day 06/14/2020, you were senselessly taken away from your family friends and loved ones. May you Continue to look down on us and Rest In Peace.