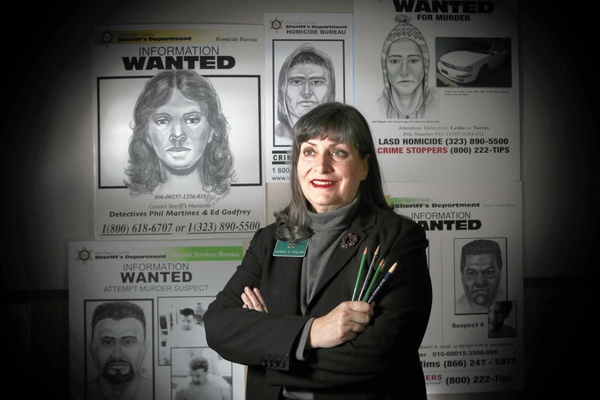 Just after Father's Day last year, 65-year-old Jose Asuncion Padilla was closing up his Lynwood taco shop when three people broke in through the back door of the kitchen. They shot him within seconds. Padilla later died at a hospital.

The killing of the father of six remains unsolved, and among the only leads are sketches of two of the three suspects. Those drawings were made by Sandra Enslow, a graphic artist for the Los Angeles County Sheriff's Department. 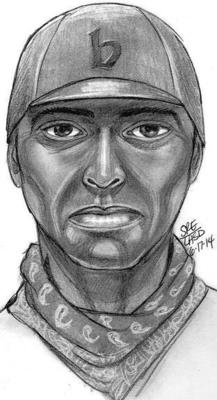 Enslow sat with a witness and, through an interpreter, turned words into a drawing.

With more than 21 years on the job, she's drawn more than 1,000 sketches for the department. Her team of three also works on crime scene diagrams and other digital imaging.

"The Homicide Bureau is our No. 1 client," she said recently, sitting in her basement office at the Sheriff's Department headquarters in Monterey Park. On her desk, the modern: two large computer monitors; and the timeless: graphite pencils and a sketchpad.

When Enslow joined the department, she was asked if she could handle gore. The test would come two weeks later, when she went to the coroner's office with a homicide detective to witness an autopsy. The detective needed to retrieve bullets from the body and asked her to observe.

"I really didn't know what to expect," she said. "It's very jolting for the very first time. But I stuck with it."

In general, it takes Enslow about two hours — from interview to sketch — to complete a composite.

She asks people what words they would use to describe the shape of a nose, whether they saw the person's eyes and what else stood out.

"The name of the game really is trying to generate an image with a lot of information in it for the case," she said. "People respond to that."

More recently, Enslow worked on a composite drawing in the killing of an elderly couple in the upscale suburb of La Verne. Using video surveillance and statements from witnesses, she had a sketch done within hours.

Enslow, who lives in the Santa Clarita Valley, has been roused in the middle of the night to drive to crime scenes. She's seen decomposing bodies, drawn faces from skulls and even drawn shoe prints.

"When you have a cooperative witness," she said, "it's important to strike while the iron's hot or you may never see that witness again."

At a hospital in 2011, she interviewed a rape victim whose jaw was broken.

"She was barely able to talk," Enslow said. Years later, detectives got a DNA hit on the suspects, and Enslow found herself in court testifying in the case.

"It's corroborative evidence," she said of her sketches and testimony.

Sheriff's Det. Mark Lillienfeld has worked with Enslow on numerous cases and calls her group's work "a great investigative tool." 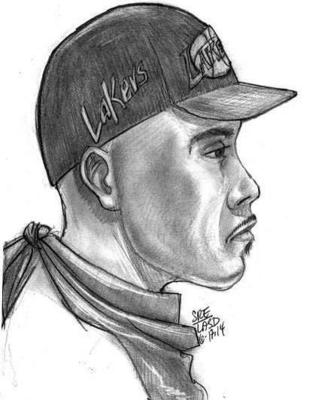 "It's very much about being able to relate to people and to listen," said Lillienfeld, who is investigating the Padilla killing.

He hopes the sketches of the two suspects can jog someone's memory. Padilla was known for being generous to the patrons of his taco shop. He loved his work and put in more than 70 hours at his two restaurants.

"What restaurant do you go to where the owner is actually there and he shakes your hand when you walk in?" said his son, Noel Padilla, 30, who was working at the shop the night of the attack, but went home before the assailants arrived.

He is hoping for closure.

"I hope they catch them," he said. "It's too late for my dad, but it might not be too late for somebody else."

Sketches: Composites of the suspects, drawn by Sandra Enslow, in the slaying of Jose Asuncion Padilla.

That's a beautiful article. Thank you for all that you do Nicole.

Enjoyed reading and learning more about sketch artist. Hats off to her. Has to be a gruesome job at times but Im sure very rewarding.
To the son who lost his father. Im so sorry. I hope justice is served soon for your father.