Risk of being shot tied to who victims know, study finds 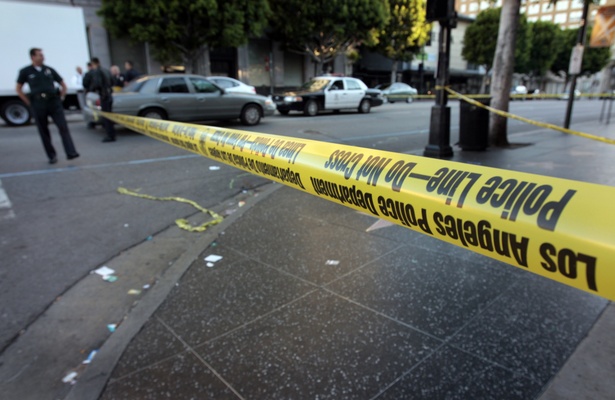 In the most violent neighborhoods, your risk of being shot often depends on who your friends and family are, according to a new study on gun violence.

The study, which focused on Chicago, found that more than 70% of all nonfatal gunshot injuries over a six-year period occurred within a network of less than 6% of the city’s population. Almost all of the victims — 89% — were in a single social network of nearly 108,000 people.

Basically, the more shooting victims someone knows, the greater his or her risk of becoming a victim.

The genesis of the study was a question that a street intervention worker on Chicago’s West Side asked Andrew Papachristos: Who is shooting whom?

Papachristos, an associate professor of sociology at Yale University, started looking at the structure of violence. He's looked at Chicago’s deadliest neighborhood and the structure behind gang killings in separate studies.

In the most recent study, published this month, Papachristos looked at the concentration of nonfatal gunshot injuries within risky social networks --  people who have been arrested and those who know them.

"The lion’s share of the shootings were not random," he told The Times.

Papachristos argues in an opinion piece in the Washington Post that the way gun violence is transmitted has “striking similarities” to public health epidemics like HIV or the spread of cholera in Haiti.

He says the idea is simple: treat homicide like a disease. People catch the disease if they engage in risky behaviors with someone who is infected.

Papachristos said this approach could help focus services such as mental health, education or law enforcement to the populations that are most likely to be affected.

“Oftentimes the people within one or two handshakes have an elevated risk of also being a victim,” he said.

Now that homicide rates in large U.S. cities are at historic lows, Papachristos said it’s time to focus on the neighborhoods that have remained violent — and the trauma the people who live there endure.

"We don’t know about peoples’ resilience."

This study is ridiculous to say the very least about it. Judging by this piece there's know such thing as an innocent victim, I've lived in los Angeles my entire life and can tell you that there are many young African and Latino Americans (mostly males) that had zero gang ties and still lost their lives because of gang members. Personally, I was shot at while sitting on my porch talking to a friend (neither one of us had any ties to gangs or crime), we need to focus on why these kids join gangs (poor education, fatherless or motherless homes, poverty, etc) rather than basically saying if a crime is committed against you than you must of had a direct or indirect connection to a person of the criminal world, I never comment on postings on this website but this piece on violence is misleading and inaccurate. How about some of these scholars who are soo interested in studying crime in low income neighborhoods actually spend a year or two in these environments rather than collecting flimsy data from their college offices or suburban homes, until then stop it.

Evidently knowing people like Suge Knight definitely increases your chances of dying. But this is like the story of the DiMeo crime family in New York. These people were so violent even the cops were afraid of them.

It's funny how after reading this family or friends of shooting victims still come on here claiming that the victim was a random innocent individual killed by coincidence. The numbers don't lie, if your dirty it will come to light.