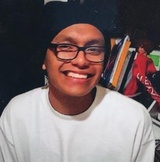 Steven Lopez, a 22-year-old Latino, was shot and killed Sunday, March 18, in the 4700 block of West 17th Street in Mid-City, according to Los Angeles County coroner’s records.

Officers found a family member cradling Lopez on the sidewalk when they arrived, Lamberti said.

Lopez was pronounced dead at the scene at 10:14 p.m., according to coroner’s records.

Police think a man walked up to Lopez, who was hanging out on a bike in front of a home, and opened fire. It’s unclear why Lopez was shot.

Rest in peace had a whole life ahead of him .
That area get hits hard y'all need to be ready and watch each other's back ....on a real note..this just looks like 20s work..they hit a few people and then go lay back for a couple of years...they love to be on 25th and Congress in the alley. As well as 5 the Ave and Adams.

I am very trouble with the way the police handled the investigation of the murder of this young man. Basically they didn't even question anyone except a handful of people. They have video of the actual shooting and description of the get away vehicle and never sought any additional information from the public. It was 3 people involved two shooters and the driver of the vehicle that dropped the two shooters off and drove up the street and waited as the execution was carried out. This kid was not a gang member and the police disrespectfully came and searched a group of mourners at the murder site. That upsets me cause they didn't interview basically no body about this crime and come around and search Stevens childhood friends for gang tattoos while they mourn the lost of their friend. Why wasn't there no press conference seeking information from the public by the police. Everyone on the block is quiet and all say the same about the police reaction...they say and believe that the police don't care because they think Steven was a gang member. He was not! 3 suspects two shooters tall thin built..and a driver of a black 4 door sedan.. African americans ....one with a slim long looking face....that is what the local kids say as they seen the suspects vehicle a few minutes earlier. Please seek more info from the public ...step it up please L.A.P.D. anyone that knows how this murder was carried out will conclude that this was not the first time these killers killed. I write this comment in support of the mother and sister of this young man.

I grew up in neighborhood 18st and the school yard crips I have so many friends that passed away all around there black and Hispanics both all are doing life in jail and so many dead and it's right next to Wilshire division police dept. It time to change dont matter how old you are u can always change your life stop the shooting u only live once.