Charges filed in 2006 killing of woman found shot inside car 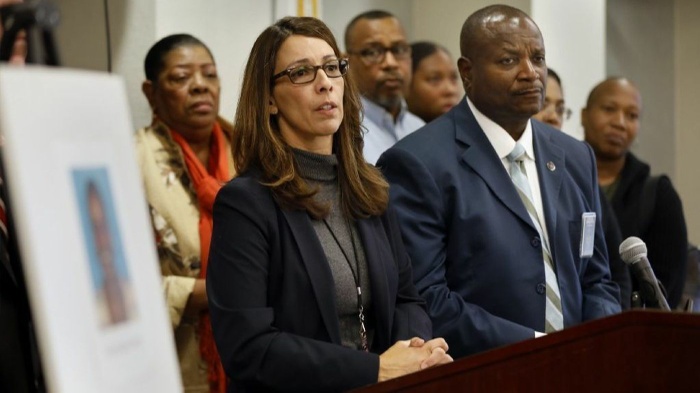 When Taja Jones failed to pick up her 14-year-old son from a babysitter one spring evening in 2006, her friends and family knew something was wrong,

The 35-year-old mother left her job at a mortgage company at about 2 p.m. on the afternoon of April 20 and never returned.

Her body was discovered five days later, crumpled on the floor of her vehicle in the 5800 block of Jefferson Boulevard. The coroner’s office concluded Jones had been shot in the head.

More than 12 years after Jones was found dead, two people — including Jones’ babysitter — have been charged with murder, police said Wednesday.

Tyranda McDaniel, 49, and Nicole Chapple, 43, who were in a relationship in 2006, might have killed Jones because of a large family inheritance, police said.

In addition to murder, McDaniel and Chapple face a special-circumstance allegation of lying in wait, according to the Los Angeles County district attorney’s office.

McDaniel is already in prison on an unrelated charge, and Chapple was taken into custody near her Fontana home on Nov. 15, according to police and online jail records.

Earlier this year, police began looking into the case again and reinterviewed several witnesses. Investigators declined to say what specific evidence they uncovered against McDaniel and Chapple, but said much of the original evidence was useful.

Chapple, Jones’ babysitter, knew her “for many years,” said Los Angeles police Det. Bertha Durazo. Chapple had been a person of interest in the case.

Nearly 20 people were present at a news conference announcing the arrests.

A family friend read a statement thanking police for their efforts.

“We have all been waiting patiently for 12 years,” Salandra Montgomery said.

Jacqueline Townes said she had known Jones since both were 2 years old and her friend was not just a murder victim.

“You can see by all of us here that she was very loved,” she said. “Without this case being solved, we would still have a lot of broken hearts.”