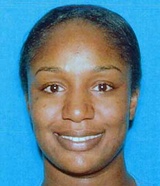 Tanaya Shanette Goins, a 32-year-old black woman, was shot and killed Thursday, March 5, in the 5100 block of Rosemead Boulevard in San Gabriel, according to Los Angeles County coroner’s records.

About 6:40 a.m., deputies from the L.A. County Sheriff’s Department responded to a call of an assault with a deadly weapon, according to a news release. Deputies arrived at an apartment and found Goins, who had been shot. Goins was pronounced dead at the scene at 6:50 a.m., said Ed Winter, assistant chief of investigations for the coroner’s office.

A 13-year-old boy whom deputies believe is Goins’ son, was also struck by gunfire and suffered non-life-threatening injuries.

Deputies believe Goins was involved in a family dispute with her brother, who was arrested on suspicion of murder that day.

Johnny Goins, a 31-year-old black man, was charged March 9 with killing his sister and the attempted murder of his nephew, according to the Los Angeles County district attorney’s office.

Do you have information to share about the life of Tanaya Shanette Goins ? The Homicide Report needs your help. Please fill out this form or e-mail us at homicidereport@latimes.com.

Share a memory or thought about Tanaya Shanette Goins

Wow! How could a brother shoot and kill his sister over an argument with his girlfriend? Blood should be thicker than water. This was a beautiful sista who shouldn't have lost her life to such foolishness. May she rest in peace and my God comfort and protect her son and family!!!❤

Seems like yesterday when I found out you were no longer here with us. I hear your voice in my head telling me all your wild adventures and traveling experiences. Tanaya is a beautiful person, a wonderful MOTHER, and a TRUE ROSE FROM CONCRET. Tanaya there were so many words left unspoken between you and I, but the one thing that you should already know is that no matter what, no matter who, no matter where, YOU will always be a part of my life. I love you Tanaya and I miss you more with each passing day. It does no good to question the reason why someone would take you away from your son, from your family, and from your dreams. Justice isn't good enough, an eye for an eye just won't do!!! Thank you for giving me and my family the opportunity to GRACE your presence and be with your KING(s). May you rest in paradise my QUEEN

Thank God this animal is off the streets, if someone can kill their own family members, he's capable of killing anyone