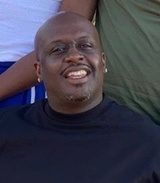 Shortly before 2 p.m., Rolison was at a gathering in a parking lot in the area when a dispute broke out, said Los Angeles Police Det. Nathan Kouri. Shots rang out, and people ran to escape the gunfire, police said.

Rolison was taken to a hospital, where he was pronounced dead at 1:56 p.m., according to coroner's records.

Rolison was the only one injured. Police estimated about 50 people gathered at the parking lot. Two vehicles were also damaged.

Do you have information to share about the life of Taron Raynell Rolison ? The Homicide Report needs your help. Please fill out this form or e-mail us at homicidereport@latimes.com.

Share a memory or thought about Taron Raynell Rolison

Taron Raynell Rolison R.I.P
I did kno him good but i talk to him when i see him at the junk yard in Monrovia we talked for a few good 15 minutes in line and was a good guy to talk to you. Rest in peace

RIP! My condolences goes out to this family! Justice needs to be served.