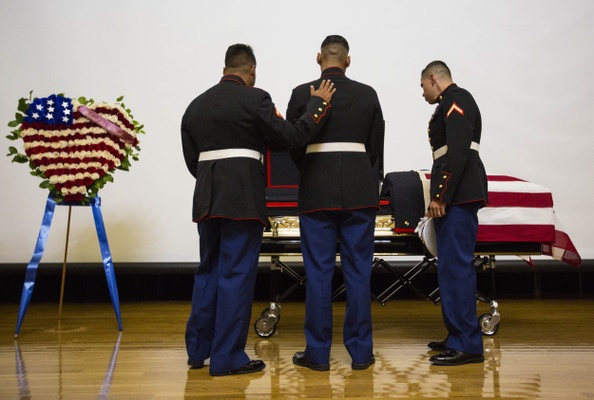 Three men who are believed to be gang members have been charged in connection with the killing of a 19-year-old Marine in September while he was on leave from Camp Pendleton visiting family and friends in South Los Angeles.

Oscar Aguilar, 26, and Esau Rios, 28, are each charged with one count of murder, according to a news release from the Los Angeles County district attorney's office. Aguilar also faces one count of possession of a firearm by a felon and dissuading a witness. Aguilar was convicted of criminal threats in 2011 and assault with a deadly weapon in 2008, according to a criminal complaint.

In addition, Ricky Valente, 18, has been charged with one count of accessory after the fact because in part, prosecutors said, he knew about the crime. Prosecutors filed gang allegations against all three defendants.

Victim Carlos Segovia-Lopez had just left his girlfriend's house in the 2100 block of West 31st Street in Jefferson Park about 11:30 p.m. Sept. 16 when he saw people vandalizing or trying to break into a nearby vehicle, police said.

Segovia-Lopez and the men "exchanged words" and Aguilar shot him, according to prosecutors. Segovia-Lopez was found slumped inside his Dodge Charger and taken to a hospital, where he was pronounced dead three days later.

Segovia-Lopez joined the Marines about eight months ago and was known for his volunteer efforts.

A graduate of James A. Foshay Learning Center, Segovia-Lopez volunteered with LA on Cloud 9, a group that helps the homeless and animals. He led a youth group called Teen Project, which aimed to motivate high school students to finish school and served as a junior counselor in South L.A. for USC Troy Camp, a mentorship program for youth.

At a funeral for Segovia-Lopez at the Cathedral of Our Lady of the Angels in early October, the commander of his training battalion told mourners about how selfless the man was.

During training, Segovia-Lopez had to endure underwater drills that pushed him almost to the point of drowning, Lt. Col. Kory Quinn said.

"The way he got through it was by focusing on the other Marines," Quinn said.

Segovia-Lopez's mother told mourners that it was her job to keep her son's memory alive. "He made me the proudest mom."

I followed this story on the news and in the LA Times print edition. This story was so sad.

Sometimes you wonder if there is a God, when angels on earth like Carlos Segovia-Lopez lose their lives. But yet and still, there are sooooooooo many true devils on this earth who don't give a crap about nobody but they are still breathing.

I didn't know you Carlos, but I wish you eternal peace.

And last but not least, I'm glad the LAPD got the devils who did this crime or had something to do with it.