Three years since a 16-year-old was shot to death: 'Someone needs to start speaking up' 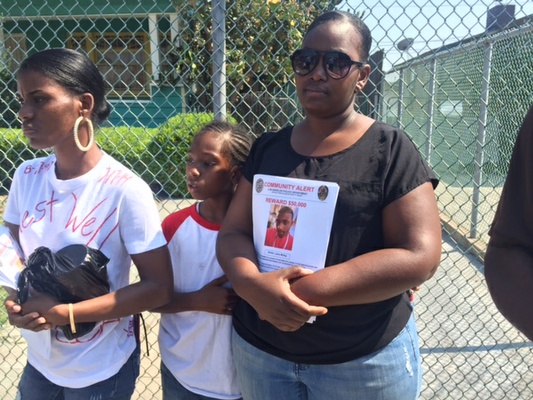 They have a deal: Once LAPD Det. Fernando Cuevas catches Larry McKay’s killer, he will come over for dinner.

Last week, Bingham and Cuevas joined Larry’s mother, LaKisha Thomas, and other relatives in the 1500 block of West 51st Street in Vermont Square to mark three years since Larry’s death.

The group had balloons and stacks of fliers advertising the $50,000 reward in the case.

Cuevas, the investigator, wonders why Larry —  a kid who always listened to his mother — left the house that night. Although Larry wasn’t a gang member, he knew where he could and could not go. How did he end up in a rival gang’s neighborhood?

“I really hope that somebody, someone will point me in the right direction,” he said. It’s possible Larry was lured to the area.

In the neighborhood last week, people handed fliers to drivers in passing cars and tucked them into screen doors, hoping someone will be prompted to offer information.

“It’s hard when you take it one day at a time and people don’t come forward,” said Tiffany Givens, McKay’s aunt. “Someone needs to start speaking up.”

The group formed a circle and held hands, some stepping forward to talk about Larry, a charming ladies’ man who “had waves for the babes.” Larry loved chili cheese fries and tacos. He would rub his mother’s feet after a long day. He enjoyed fishing with his grandfather and looked forward to the day he’d get to pilot the van. Larry never got to meet his daughter, London, now 2. Relatives say she acts like him.

Larry's mother had a hard time talking about her only son. She said she’s angry. Her mother, Bingham, told her it’s OK to be mad. 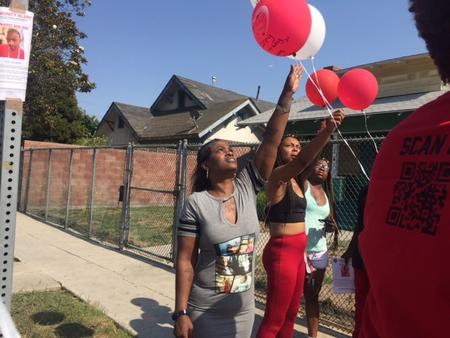 The group prayed for justice, led by Pastor Michael D. Starks. “One day, Kisha, we’re going to sit in that courtroom, and we’re going to see justice prevail,” Starks told the group.

Bingham remembers her grandson each time she makes tea. She sometimes sees his features — his light skin or laid back persona — in other relatives.

In her bedroom, she keeps a poster board with photographs of her grandson. She believes he is watching over her.

And sometimes, she thinks about what she will cook for Cuevas when the killer is found.

Photo, above: Tiffany Givens holds a flier promoting the reward in her nephew's killing.

I met Larry when he attended John Muir Middle School. He was always respectful and well behaved towards teachers and staff. If I remember correctly, he transferred to Muir from out of the neighborhood and immediately was challenged by some of the local gangs at the school and in the area. It can be very tough for the youth growing up in these inner city streets. The hard tough shell that many of the youth pose on the streets is not necessarily who these kids are but rather a way to survive in these violent streets.

Thanks so much for sharing this families story as they seek justice for their loved one Larry McKay. We all attend the same church, Ray of Light Missionary Baptist Church, on 49th and Western, where my ministry, Mothers In Charge, supports families who have been impacted violence. Many of the members of Mothers In Charge have loss loved ones to violence. Someone knows what happened to Larry McKay. He was loved and is deeply missed by his family and friends. So many warm stories were shared about Larry at the vigil. His birthday is coming up in August and he would have been age 20. Far to young to die! Help this family get justice. If you know something say something. If you have been or know someone who has bee impacted by violence and are seeking support or a voice to support others seeking justice, join us at for the Community Healing Zone. Call 424-223-8008 for information.