A weekend for 'remembering the good things' about slain loved ones 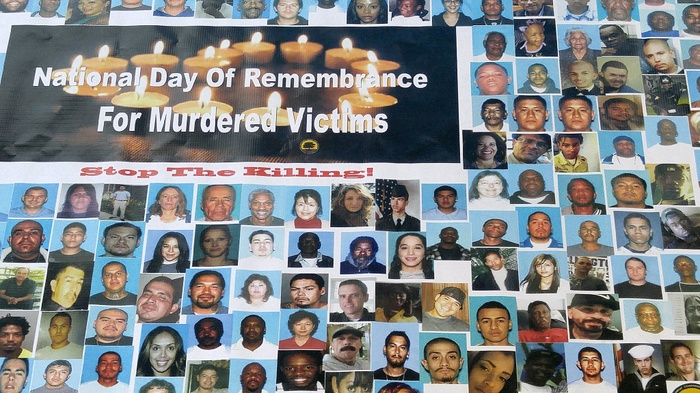 It's hard to make sense of this number — 1,373 homicides in Los Angeles County since Sept. 1, 2016 — until you think of it this way: Every day over the last two years,  roughly two men, women or children  have been shot, stabbed, struck or otherwise killed by another human being.

The eldest was 94-year-old Evelyn Marion Lane, who died April 21 after she was struck on the head in a Santa Monica convalescent center. The youngest died in the womb after their mothers were killed, like Jay Salinas Onofre, a 5-month-old fetus whose mother, Abril Onofre, 19, was fatally shot at a 4th of July party in Westlake.

The names of those victims will be read aloud during a ceremony and festival from 3 to 8 p.m. on Saturday, Sept. 22, during the National Day of Remembrance for Murdered Victims at Point Fermin Park, 807 W. Paseo Del Mar in San Pedro. Other activities include a candle light and balloon ceremony, music, information booths, free food and drink.

“We’re going to be remembering the good things about loved ones, not the bad thing that happened,” Hawkins said.

“We want it to be uplifting, and we want to build awareness about this crime called homicide. Many people are confused. They think only bad people are murdered, and we’re trying to make people aware that murder doesn’t discriminate. Anyone can be a victim of this crime.”

Attendees can check to make sure their loved one is on the list of names to be read, and can ask to have a name added, Hawkins said. Organizers are also asking attendees to bring a pair of shoes and a photo of the homicide victim they want to remember, to be displayed during a silent march against gun violence.

On Sunday, Justice for Murdered Children and Justice for Homicide Victims has organized its first 5K walk-run to raise awareness about homicides. Registration begins at 11 a.m.  at Rosie Dog Park, 5000 E. Ocean Blvd. in Long Beach. The walk-run begins at 1 p.m. and the route will take participants along the beach, Hawkins said. Registration is $25, she said, and participants get a T-shirt and goodie bag.

Hawkins said her goal is to help people understand that homicides don’t just devastate the families of victims. “Everybody’s affected,” she said. “Think about your children, and the neighborhood and even the business owners. It can take over your whole community.”

One of her priorities is getting people to push past their fear and help investigators find the perpetrators, she said. “I used to tell kids ‘Don’t be a tattletale,’ but we as parents need to end that. We have to get rid of the bad stigma about standing up and saying what you know.”

Her other priority is to convince gun owners to keep their weapons locked up and out of the hands of children and teens. Her sister, Linda Whiting, 48, was killed March 14, 2011, in Phoenix, when she went to the home of a new acquaintance to work on a craft project. The woman’s teenage son found a loaded gun in his parents’ bedroom and shot five people in the house, including his mother, stepfather and Hawkins’ sister, the only fatality.

“It didn’t make any sense,” Hawkins said. "She didn't know this woman from Adam's apple and the son had just arrived that morning from Detroit, mad at his mom. So my sister is dead because you have a loaded gun in a house with a kid who has problems…. I’m not mad you had the gun….I'm mad you didn’t do the right thing with the gun.”

Today, Hawkins shares her home with her sister’s granddaughter and great granddaughter, whose laughter bubbles in the background as she tells her story.

“They stay with me now because my sister couldn't be here," Hawkins said. "If something goes wrong you’re supposed to be with your grandma, but my sister can’t be with them because she was killed by some 17-year-old kid doing something stupid. You just don’t know the effect of these things. They affect the entire family for years.”

I often come to this site. I myself have loved ones that were innocently killed and would like to have participated in this event. Wish I would have known before hand. How can I be notify for upcoming events?