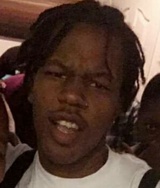 Travon Brown Jr., a 21-year-old black man, died Sunday, Dec. 3, after he was shot in the 200 block of Willowbrook Avenue in Compton, according to Los Angeles County coroner's records.

Brown was standing near the ticket machines on the Metro Blue Line passenger platform about 3:30 p.m. when he began arguing with a group of people who got off the train, said L.A. County Sheriff's Lt. Derrick Alfred.

"Words were thrown back and forth ... it was a gang-related thing," Alfred said. "Someone got disrespected and it became a fight, then a gunshot was fired and the victim was struck."

Everyone scattered when the shots were fired, Alfred said. Brown ran a short distance then collapsed.

Paramedics took Brown to a nearby hospital where he was pronounced dead at 4:27 p.m., according to coroner's records. The cause of death was listed as a gunshot wound to the chest.

The shooter, described as a black adult male, fled the scene on foot, Alfred said.

Do you have information to share about the life of Travon Lamont Brown Jr. ? The Homicide Report needs your help. Please fill out this form or e-mail us at homicidereport@latimes.com.

Share a memory or thought about Travon Lamont Brown Jr.

You have my respect nephew for the rest of my life,

we love you keep flying.

Man Just Miss n You Nephew..Dec 3, 2017 Our Lives Changed Forever...This Shit Hurts Like Hell...You Were/Are Loved By So Many... Can't Believe It's Been a Whole Yr.. Really Feels Like It Was Just Yesterday....Our Lives will Never Be The Same Again #JUSTICEWILLBESERVEDNEPHEW #CONTINUETOFLYHIGHBABYBOY #Gonebutnevereverforgotten #alwaysinourhearts

Nephew you were truly loved. I'm proud to call you my nephew you were an outgoing kind and very respectful young man, when I got the phone call you've been shot my first reaction was not my nephew. I started praying right then asking God not to take you from our family I followed behind you too the hospital still praying asking God for favor, when the doctor came out the surgery room I knew then it was bad news. This death has shock our family. We're still in disbelief that you're gone. If I had one wish. Nephew life without you is so hard right now we love and miss you dearly. There's no words that can heal our hearts. I want the killer to know he took you away from us to senseless violence and now both families are suffering because now he's going to spend life in prison and you're spending eternal life with God. My heart is broken life without the ones you love is the hardest part of living. To my nephew your mom and dad and aunt's and cousins love and miss you so much but of course you already knew that because that's how our family is we say I love you and show love and support not just in bad times but ALL the time. O.T.F nephew O.T.F (only the family) LOYALTY INSIDE OUR DNA

Travon brown was a good kid I watched him grow up from woodcreast elementary school he will truly be missed .fly high jr your in a better place god needed you more I'm gonna miss seeing you on the train 🙁 saying hi poohda with that beautiful smile of yours love you always and forever...your neighbor Poohda & family

This is why I dont ride the blue-line in Compton, not safe.