Two men have been charged with murder and are due in court in December in connection with the Aug. 17 stabbing death of Rodney Paul Craig, 56, a homeless man and former professional baseball player who was killed during a fight in downtown Los Angeles.

A judge on Wednesday delayed until Dec. 5 a decision on a preliminary hearing for Anthony Solomon Johnson, 23, and Billy Akai Morales, 32. If convicted, Morales faces a longer sentence because of a felony robbery conviction in New York in 2001. 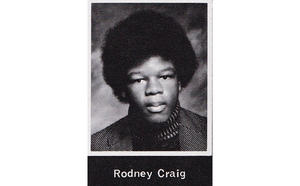 The fight began when Craig set up camp and apparently encroached upon the territory of a transient group, Los Angeles Police Det. Al Marengo said. They demanded Craig move. As he walked away he attempted to kick a dog belonging to someone in the group, sparking a fight that left him dead.

Early in the case, police sought a third suspect, but they arrested only two men after reviewing surveillance video.

It's unclear how Craig ended up sleeping on downtown L.A. sidewalks, far from the lights of Major League Baseball stadiums.

Craig played in 145 big league games over four seasons from 1979 to 1986 for the Seattle Mariners, Cleveland Indians and Chicago White Sox.

He grew up in Carson and was an athlete at Narbonne High School in L.A.'s Harbor City neighborhood.

"Anything that had to do with sports, Rodney wanted to do it," friend Gregory Sampson said. "But his first love was baseball."

Friends on the Narbonne varsity football team said fellow players viewed Craig, who was black, as the team's most talented running back. But Narbonne athletics were dominated by white players and coaches in the mid-1970s, and Craig was pushed to the bottom of the depth chart. Craig quit the team, Sampson said.

After high school, the 6-feet, 1-inch switch-hitting outfielder traveled to Texas to play college baseball. At age 20, his speed and batting abilities impressed scouts from the Seattle Mariners, who signed him as an undrafted free agent.

"He was in a minor league camp with a 100 other players, and a coach says to them that only four of them will make the majors," Martin said. "And Rodney looked around and wondered, 'What are all of you going to do after this?' because he knew he was going to the majors."

Two years after being signed, the Mariners called Craig up from the minors for the final month of the season. He recorded at least one hit in 14 of his first 16 games.

Craig began the 1980 season as the Mariners' starting center fielder. A shoulder injury interrupted a hot streak and sidelined him for much of that summer. The next spring, the Mariners traded him to Cleveland, where he saw little playing time. Craig was briefly on the New York Mets' payroll but never played for the team in the big leagues.

Craig has the distinction of being the first player signed and developed by the Mariners – the team was founded in 1977 — to reach the majors. Some baseball-card collectors also remember Craig as one of the few players to appear on a card with his eyes nearly closed.

Sampson said he last saw Craig around the time of Craig's mother's funeral. She died in 2001.

Craig had skipped the funeral, and Sampson found him walking along a Compton street. When confronted, Sampson said, Craig refused to believe his mother had died.

"I realized something had really happened to him," Sampson said. "He couldn't see anything besides baseball, and that took him into a downward spiral, I guess."

By 2001, court records show Craig had been arrested at least once in Arizona and three times in Florida. An assault charge in Tucson was dismissed. But in Fort Lauderdale, he pleaded no contest to a trespassing charge and served three weeks in Broward County jail in 2002.

In July 2004, Craig was arrested during a fight in El Paso, and a grand jury indicted him on charges related to striking a homeless man on the head with a rock. Craig told public defender Paul Troche that he had acted in self defense.

But Craig was bouncing on and off his medication, revolving from states of brilliance to polite strangeness, Troche said. The court found him mentally incompetent to stand trial, and he was sent to a state psychiatric hospital. Prosecutors later dropped the assault charge when a witness failed to appear in court, according to court records.

Troche said Craig hung around El Paso for a couple of years after.

"He's one of those colorful figures that you run into, even in our sleepy little town," Troche said. He still uses Craig as an example when teaching law students about incompetency statutes.

"He may have had problems, but he wasn't stupid," Troche said. "He was sly. He'd refuse to shower to anger the jail guards."

Craig was arrested in Florida's Miami-Dade County in 2008 on suspicion of entering a park after hours. What happened between then and the August night he tried to set up camp in a new spot in downtown L.A. is unclear. Craig appears to have sustained himself with retirement benefits from Major League Baseball.

"He was a great hitter," Martin said. "I never really understood why he didn't have more longevity in his career. I don't know if he clashed with people or what really happened."

I spent the 1979 season with the Seattle M’s California League champion San Jose Missions as a baseball operations worker. I got to know Rodney very well and was so proud to see him play with confidence and talent in MLB. I lost track of him in the late 80’s. I was devastated to find out how his life turned on him. Rodney was a good person, great talent, confident & smart. Man I wish I knew his struggles, I never saw this from him. Had I known I would have done something. It’s a disgrace he lived this way and left earth this way. He deserved better. God Bless his soul.

Debbie, it's people like you who need serious help. You take one line out of a story and make things up about a person who has been killed. If you want to know the facts, you would have found out that the dog tried to bite Rodney and and that's why he tried to kick the dog. I know Rodney's cousin and Rodney was a gentile soul, you should take your PETA views and rethink your life. Somethings wrong with you. RIP Rodney.

I knew Rodney Craig when I was in High School. I also played at Narbonne and when he had time he would come back and speak with us. Whats crazy is I still have the playing card that he gave me when he went to the bigs with Seattle. He was a great dude and spread knowledge to us young ball players. I am so saddened to hear how he ended up on the streets. It just lets me know that you never know. RIP Rodney.

he was violent and a abuser of animals.......brought it on himself

Hard to say exactly what went wrong with Mr. Craig's life. I didn't have the pleasure to make his acquaintance. At one point he had a life that held great potential.

He had the opportunity to live a life that most American boys can only dream of, even if just for a short time.

I'm very sorry to hear that his life ended under such tragic circumstances. I've been a baseball fan most of my life, and have been a fan of the Mariners since their inception.

May God have mercy on Mr. Craig's troubled soul. Rest In Peace.

Really sad and touching story regarding the life of this man. Maybe not making it big in the majors as he thought led to his downward spiral to homelessness.