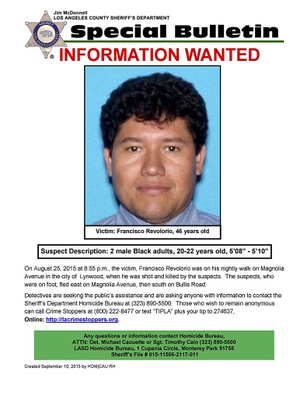 Investigators are asking for the community's help in identifying two young black men who allegedly shot and killed Lynwood resident Francisco Revolorio as he was out for his evening walk on Aug. 25, according to the Los Angeles County Sheriff's Department Homicide Bureau.

Revolorio, 46, was walking in his neighborhood about 8:55 p.m., just a short distance from his home in the 3600 block of Magnolia Avenue, when he was confronted and shot by two men who were also on foot, according to a Sheriff's Department news release.

Witnesses described the men as black, between the ages of 20 and 22, and about 5 feet 8 to 5 feet 10. After the shooting, they ran east on Magnolia Avenue and then south on Bullis Road, according to the release.

The Sheriff's Department issued an information wanted poster Tuesday, with a photograph of Revolorio.

Anyone who saw the shooting or has information about the suspects is asked to call the Homicide Bureau at (323) 890-5500. Those wishing to remain anonymous should call Crime Stoppers at (800) 222-8477.