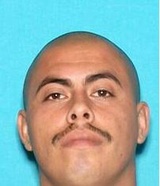 Valente Casas, a 23-year-old Latino, was shot and killed early Sunday, Nov. 1, in the 9600 block of Par Place in Pico Rivera, according to Los Angeles County coroner's records.

Casas and 70 to 80 other people were at a Halloween party at a residence, Los Angeles County Sheriff’s Department Lt. Victor Lewandowski said.

Shortly after midnight, Casas got into an argument with another attendee in the backyard, Lewandowski said. Witnesses told investigators that the argument spilled into the frontyard, he said, and that the shooter then fired several times at Casas before running away.

Casas was pronounced dead at the scene at 12:40 a.m., according to coroner’s records.

Investigators believe the shooting may have been gang-related, Lewandowski said. They believe Casas and the gunman hadn't been invited to the party and came without knowing the other was in attendance.

The gunman was described as Latino with a shaved head in his early 20s, Lewandowski said. He was last seen running north away from the house. A black vehicle left the party about the same time as the shooting, heading in the same direction, he said, but investigators don’t know if the driver was somehow connected or was just leaving because of the gunfire.

Do you have information to share about the life of Valente Casas ? The Homicide Report needs your help. Please fill out this form or e-mail us at homicidereport@latimes.com.

Any Updates? Did anyone get arrested?

If the man in the picture accompanying this article is in fact a non-Hispanic white, I will eat my shoe.