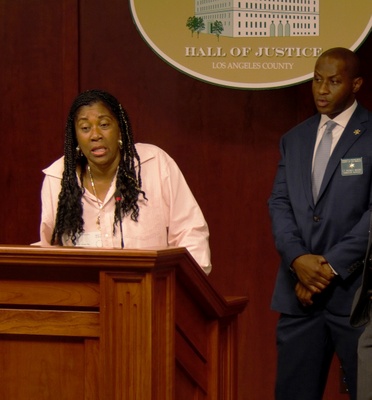 At 65, George Leon McKinney was retired and homeless, but he still worked six days a week, collecting bottles and cans from people who knew him when he worked maintenance with his father in West Hollywood.

McKinney always started at 5 a.m., his sister Denise Key said, so he probably was winding up for the day around 1:45 p.m. on Wednesday, May 23, when someone struck him from behind in the middle of the intersection at Hilldale Avenue and Santa Monica Boulevard.

The blow caused McKinney to fall into the street, said Los Angeles County Sheriff’s Lt. Rodney Moore. He was taken to a nearby hospital, where he was pronounced dead at 10:36 a.m. the following day.

At a news conference Thursday, investigators showed surveillance video and photos of a man they think argued with McKinney and then followed him moments before he was struck.

The videos begin around Palm Avenue and Santa Monica Boulevard, where a tall, thin black man in a dark-colored Mazda 6 hastily parks his car and follows McKinney down the street.

“He didn’t try to park carefully,” Det. Mike Davis said after the news conference. “You can see the victim looking over his shoulder multiple times, and then when they get to the restaurant LA Buns, just west of where the car wash is, you can see things get a little more heated. A communication takes place between them, and at one point, the suspect stands on a little wall, like he’s trying to puff himself up a little bit.”

After the exchange, McKinney kept walking south on Santa Monica Boulevard, and the other man got back in his car, Davis said. 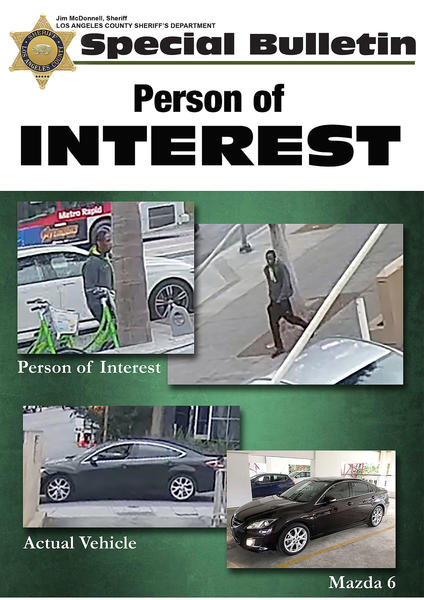 Investigators have another video of the man driving down an alley that paralleled the route McKinney was walking on Santa Monica Boulevard, Davis said. He appeared in another video on foot, walking behind McKinney a short distance from Hilldale Avenue, where the homeless man was struck.

In the video, it doesn’t appear that McKinney knew he was being followed.

Moore said investigators hope the video will jog the memory of people who were in the area that afternoon. Detectives don’t know what caused the man to argue with McKinney, Davis said, but they’re hoping someone can fill in that gap.

Key said she doesn’t recognize the man in the video, and it wasn’t like her brother to talk with strangers. He was quiet and kept to himself, she said, unless he was talking to people he knew.

Family was his biggest interest, Key said. He called her several times a week, including the day before he was attacked, to check in and catch up on what was happening with her and her children.

“Leon — we all called him Leon — had some hard times, but he still acted like he was the oldest,” Key said after the news conference. “He was the oldest boy of us seven children, and he took that role very seriously.”

So seriously, she said, that he often tried to give money to her and other family despite his limited means.

“He was just a kind person, a good guy and very family-oriented,” said Denise’s son, Joshua Key. “I always had to tell him to keep his money, but he’d still give some to my son. He just loved his family, probably more than anything.”

McKinney could have lived with her or other family members, Denise Key said, “but he was too independent and stubborn.” He did stay with his sister for a while when he got sick in 2016, but once she nursed him back to health, he moved out again.

“He didn’t want to be beholden to anyone,” she said.

McKinney spent years helping his father, George Washington McKinney, maintain apartments in West Hollywood, she said, and work on construction projects around Los Angeles. People who knew him from those times would save bottles and cans for him to recycle.

He couldn’t stop working, even after he retired, she said, but he always finished his collections by 3 p.m. He wasn’t one to stay out at night, she said. Instead, he’d head to a nearby mission or stay with a friend in West Hollywood.

He was always tucked in somewhere, she said, when he called her at night.

“He kept me uplifted,” Key said. “If I was feeling down, he was always there to tell me everything is going to be OK. And he always had a smile. I miss his smile. I miss my brother.”

WHY???? Why won't you publish conviction rates
in Los Angeles?
% of murders that are solved and unsolved
and break down by race?
WHY?