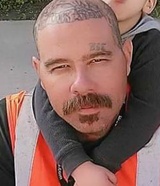 Vinson Lee Ramos, a 37-year-old Latino, was shot and killed by police officers on Thursday, July 7, in the 7100 block of South Atlantic Avenue in Bell, according to Los Angeles County coroner’s records.

Ramos allegedly asked Bell Police officers to shoot him and then charged toward them with a knife after a domestic dispute inside a nearby restaurant and store, said Los Angeles County Sheriff’s Sgt. Bill Cotter, whose homicide team is investigating the shooting.

The officers were called to s 7-Eleven store at 8:20 a.m. after Ramos and his girlfriend, who is 8-months pregnant, got into an argument at a Jack In the Box next door, Cotter said.

Ramos allegedly shoved his girlfriend against a wall at the restaurant and then walked next door to the 7-Eleven, Cotter said. The woman followed, with her 5-year-old son in tow, he said.

Witnesses reported that Ramos was allegedly holding a folding knife with a 4-inch blade at the restaurant and the store, Cotter said. “He was very aggressive in the store. The people in there ran and hid.”

Someone called 911, and when officers arrived, they stayed in the store parking lot and ordered Ramos to come out and drop his knife, Cotter said.

“He came out and was telling them to shoot him,” Cotter said. “His girlfriend was outside, and the officers told her to get away from him, so she took the child and hid somewhere in the store.”

Ramos followed his girlfriend back the store briefly, Cotter said, and then came back outside, walking “pretty dang fast” towards the officers and still brandishing the knife.

Three of the five officers there fired at Ramos multiple times, Cotter said. Ramos was hit by several bullets and was taken to a nearby hospital, where he was pronounced dead at 8:52 a.m.

“He wanted the officers to shoot him,” Cotter said.

“We can talk all day about the dynamic of it all, but with a guy like this, he went out and forced these three officers to protect themselves and one another because he decided he wanted his life to end. It’s a terrible thing, because I’m sure these officers didn’t go to work that day hoping to shoot someone. He chose this path, and he left a child who’s orphaned now and altered the lives of three policemen who wanted nothing more than to serve the public all day.”

Cotter said he couldn’t yet identify the shooting officers. They were all veterans of the force, he said.

The shooting is under investigation by a the Los Angeles County Sheriff’s Department Homicide Bureau. Anyone with information is asked to call the (323) 890-5500. Those wishing to remain anonymous should call Crime Stoppers at (800) 222-8477.

Do you have information to share about the life of Vinson Lee Ramos ? The Homicide Report needs your help. Please fill out this form or e-mail us at homicidereport@latimes.com.

Share a memory or thought about Vinson Lee Ramos

That report is not accurate, there were several public witnesses there whom said he was unarmed and talking on his cell phone. Rest in peace little brother

Happy birthday to my handsome love theres not a day that goes by I dont think of you loving u forever thank u for your honest love kids and sweet memories and dreams....

Happy birthday my handsome man From You’re WIfe NELY AND KIDS LOGAN AND VINSON JR WE MISS U DEARLY WISH YOU WERE HERE PAPA..THIS PAIN IS HEAVY IN My HEART I WILL NEVER FORGET YOUR LAST WORDS LOVE U FOREVER NEly y vinson

Happy birthday my love from me and the kids ...love and miss u dearly wish u was here we will forever celebrate your life love your wife Nely and kids Logan and Vinson jr

Happy Father's Day 👨 my love we love and miss u dearly...

I miss you my love wish you was here with me and the boys logan misses you talks about you a lot and the baby jr looks exactly like you I see a lot of you in him I know your always watching us....my heart hurts for you everyday.....wish I can bring you back.....love your wife janely.....l

Sporty, I was just wishing you and Casper "Happy Birthday" on his LA Times Storyline to just learn about your fate. I'm truly sadden by the news. May you rest in peace with your brother.

If you train cops to shoot people - that's what they will do. Cops need to be trained differently and they need to have other tools besides a gun. With all the advances in technology, there has got to be alternatives to using guns when a person is armed only with a knife.

Also to clarify he me never hit me or me hit him media is full of everything it was just a normal argument point blank ..if u knew he was telling u to kill him u should of got help for him worked with him or tazered him he was a good distance away from cops and 3 cops it took come on....

I miss u my love everyday my heart aches for u.. stupid cops didn't have to do this to u.. excessive force praying for justice SOON.....love u forever

This report is not accurate, what I question is if they knew he was mentally unstable and wanted them to shoot him, they should have took different measures in responding instead of brutally killing him. Furthermore, he had a 4 inch knife against three police officers whom had guns, I don't get it. I'm calling it as I see it police brutality. That's my personal opinion, maybe it's blast because that is my brother but a lot of peop.e feel the same as I do

we were co workers for about a month. you always kept to yourself but we talked a couple times. you were so down to earth vinson. I'm sorry things went down the way they did. my mom who also worked in that produce facility told me they shot you and i couldn't believe it. rest in peace.

I miss my sweet dear friend. I wish things could have went differently. You will forever be in our hearts ❤

Vinson Ramos was my baby cousin.
Tazers would be very effective. 3 OFFICERS OPEN FIRE ON VINSON. You care so often that 'Bad guys' and 'overkill'.
My God if this was not over kill with a man with a 4" knife, I am not sure what is for a police officer. They didn't have to shot him by one cop let alone 3. A tazer would of worked, we would have no dead body. They could of hand cuffed him and that would be normal. Why??? Why??? 3? Why did they have to shoot him like a dog with rabies about to attack. I am so mad. I hurt for my cousin Rochele his sister. This is a tragedy.
Shannon
Seattle, WA