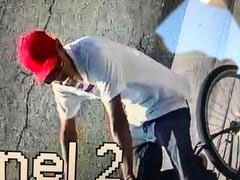 William Escamilla, a 16-year-old Latino, died Monday, Sept. 11, after he was stabbed in the 11900 block of Long Beach Boulevard in Lynwood, according to Los Angeles County coroner’s records.

William was in a parking lot behind the Free Dry Coin Laundry at 11904 Long Beach Boulevard when he was attacked about 4 p.m., according to coroner’s records.

A few minutes earlier, William had been washing clothes inside the laundromat with his mother, said Los Angeles County Sheriff’s Sgt. Marcelo Quintero. He went outside to get a bottle of water from their car and was confronted by a man on a bicycle.

“We think the motive was robbery,” Quintero said. “There’s no indication these people knew each other. This man confronted him and ended up cutting him on the left side of his neck.”

The suspect, described as a thin Latino with multiple tattoos, rode away from the parking lot, heading north on Long Beach Boulevard.

William’s mother saw some of the attack when she walked out into the parking lot, Quintero said.

They tried to stem the bleeding by wrapping a T-shirt around his neck, and then she drove him to a nearby hospital, Quintero said.

William was pronounced dead at 4:39 p.m., according to coroner’s records.

Security camera footage showed a wiry Latino with a red cap, white polo-style shirt and jeans, Quintero said. The suspect appears to be between 25 and 40 years old.

William was a student at Marco Antonio Firebaugh High School in Lynwood, Quintero said. An online fundraising account has been started to help his mother and sister pay for his funeral.

“He was only a teen, and should have had many more years ahead of him,” said the explanation on the site. “Nobody should pass away this young.”

Do you have information to share about the life of William Escamilla ? The Homicide Report needs your help. Please fill out this form or e-mail us at homicidereport@latimes.com.

I never got to say goodbye but I hope you left this world with a mind full of amazing memories. You will always be missed 💔

It is very unfortunate to see these type of cases that happen on the daily. My heart aches for you. God bless you little angel❤️

Damn, even though I didn't know who he was , I be seeing people down and sad crying for you, but I just wanna say r.I.p. , ill see u soon in heaven 🙏