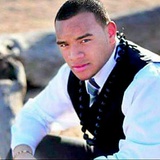 A few blocks away from the burger restaurant, Fifita stopped at Crenshaw Boulevard and was about to make a left turn when another car pulled up on the right side, Jauch said. One or more people inside began shooting.

Fifita and his two male friends in the backseat were struck multiple times, Jauch said. A female in the front passenger seat was uninjured.

The car rolled to a parking lot at the northeast corner of the intersection and the suspect car drove away, headed east on Rosecrans, Jauch said.

Fifita was pronounced dead at the scene, according to coroner’s records. The two males were taken to the hospital, where they were expected to survive, Jauch said.

The suspect car was initially described as a dark sedan, but Jauch said that information was not verified. One witness told KTLA-TV that he heard shouting between the two cars before the shooting began and saw gunfire from a white Kia.

Jauch wouldn’t comment about any verbal exchange between the two cars. Investigators have no information about the suspects or their motives, he said while emphasizing that the victims had no gang affiliations.

No details were available about the young woman, but Fifita and his two friends were students at Mt. San Antonio College, and aspiring players for the school's football team, said assistant coach Evans Roderick.

“Those three kids who got hurt are the nicest kids in the world,” Roderick said. “Junior comes from a strong faith-based family. His father is a deputy sheriff .... They were at a Mormon church dance, they went to get something to eat and ended up in the wrong neighborhood.”

Fifita grew up in Adelanto, near Victorville, and graduated from high school with a 4.0 grade-point average, said Ula Matavao, an academic counselor for the school's Arise Program, a support program for Asian American and Pacific Islander students. Matavao also volunteers with the football team.

Fifita spent two years on a church mission in Guatemala after high school, and just started as a freshman at Mt. San Antonio College on Feb. 29. He was active in the Pacific Islanders Club and was working with students in the Arise Program, Matavao said. Fifita also worked nights loading cargo at the Ontario International Airport.

Matavao said Fifita and his friends, who grew up in Utah, weren’t “attuned” to the area where they were driving.

“They didn’t know who was following them. They had no idea what was going on,” Matavao said.

“I just want to put it out there that Junior was a model of what a young man should be in this life. I would want my son to be like Jrunior; I would want my daughter to date Junior, because that’s the kind of person he is, and to think that he’s gone … it just feels surreal," Matavao said.

Fifita was one of more than 100 people trying out for the school's 2016 football team, said Head Coach Bob Jastrab. Coaches already knew Fifita would make the cut, based on his talent, work ethic and drive, he said.

The day after the shooting, coaches read Fifita's personal essay to the team.

“He talked about family and his commitment to the church and wanting to work hard and play hard for his younger sister, who has a disability,” Jastrab said. “It choked up a lot of people in the meeting.”

This is the second year of loss for the Mt. SAC football team, Roderick said. Last season, freshman long snapper George Steward was killed in an automobile collision, he said, “and this is even tougher, because this was no accident.”

An online fundraiser to help cover the cost of Fifita’s burial expenses raised more than $20,000 in less than 48 hours.

Do you have information to share about the life of William Huluhold-Greathouse Fifita ? The Homicide Report needs your help. Please fill out this form or e-mail us at homicidereport@latimes.com.

Share a memory or thought about William Huluhold-Greathouse Fifita

Has there been any updates on this?

My prayers goes out to the family iam truly sorry for your lost... God has him...he was a innocent person just going out to enjoy a meal its sad that now and days you cant even go out to enjoy life without someone elses foolishness....i will keep the family in my prays...

This is a totally senseless murder. This is so sad that now a mom has to bury her son who was not doing anything wrong. This needs to stop. I pray to God that whoever did this has no peace until he is arrested for what he has done. No peace.