Wilmington teen fatally shot near his home dreamed of graduation 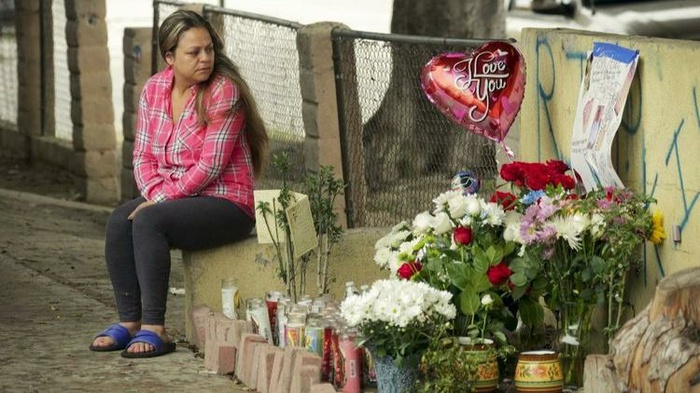 Fabian Nunez had everything ready for his high school graduation. His uncle had bought him a blue suit along with a shiny pair of black dress shoes to wear with his green cap and gown.

But two days before the 17-year-old was set to receive his diploma from Narbonne High School, he was shot and killed steps away from his Wilmington apartment.

Fabian was raised by a single mother in a rough neighborhood. His main goal was to finish school, a dream he talked about with friends and family.

“He always did his work,” his friend Javier Delgado, 17, said. “He always tried to show people he was good at school.”

Javier and other friends and family gathered Wednesday to grieve outside the home Fabian shared with his mother and two younger sisters.

Dozens of candles were placed near a wall, along with bouquets of red-and-white roses and balloons commemorating the almost-graduate.

His father, Saul Nunez, stood near the shrine with tears in his eyes. He said his son had lots of dreams and listened when he told him to be a good kid.

“He had a big heart,” Fabian’s cousin, Cynthia Batista, said. “He was really smart, a hardworking guy.”

Early Tuesday morning, Fabian and three friends had just returned from the beach and parked down the street from his home. The group was walking in the 900 block of West I Street when a vehicle drove by and slowed before taking off again, Los Angeles Police Officer Jeff Tiffin said.

The group began to pick up its pace, then the car pulled up again and stopped in an alley. A man wearing dark clothing got out, ran toward Fabian, who was behind his friends, and began shooting.

Fabian, who was on the sidewalk, tried to run away. He collapsed in the driveway of a nearby duplex, and the shooter got back into the vehicle and fled, police said.

Detectives said Wednesday they’re trying to narrow a vehicle description and are looking into why someone would want to shoot Fabian. It’s unclear whether the shooting was related to gang activity in the neighborhood because the area had recently “been kind of quiet,” Tiffin said.

Tiffin said as he and his partner interview people, he’s finding that Fabian was “well-liked” and a “good kid.”

“Everyone at the school had nice things to say about him, said he was very respectful,” Tiffin said.

Alex Brito, 18, who was with Nunez that night, said he heard feet scattering and gunshots. Brito ran up to Fabian, who was on the ground struggling to breathe with a mouth full of blood.

Brito told Fabian that he would be OK and tried to perform CPR. Moments later, an ambulance arrived. Fabian was taken to a hospital, where he was pronounced dead, according to Los Angeles County coroner’s officials.

“His death is a loss to the entire L.A. Unified family,” King said.

King said in the statement that crisis counselors would be available for students at the school.

“He was always happy,” Javier said.

Sometimes at school, Fabian was pressured to join gangs and got picked on, Javier said, but Fabian fought back.

“He wasn’t going to let himself get punked on,” Javier said.

Brito said that he and Fabian planned to wear matching suits to graduation and wanted to join the military together.

“He wasn’t looking for any trouble,” Brito said.

Now, Brito said, joining the military may be postponed by his friend’s death. But Brito said he will wear his blue suit at graduation, in honor of his friend Fabian.

My entire heart goes out to Fabian's family and friends. I'm so sick and tired of gangsters and taggers that think they own the streets. When are they going to pass a law against forming gangs? All there is are injunctions that prohibits them from hanging out in groups and that is not working. i am not going to say rest in peace, because Fabian should NOT be resting in peace. He should be here, graduating and making mom and family proud of him. Instead I am going to say: Now you live in heaven with God and good people that love you and will take care of you. Your spirit lives forever, that punk ass did not kill it.
I pray that God comforts your family and friends.