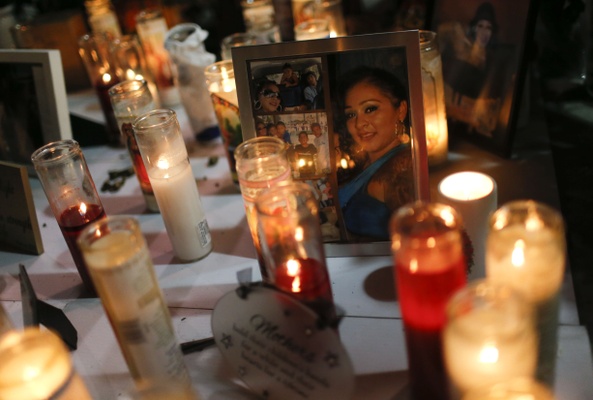 Until New Year’s Eve, a woman had not been killed by a law enforcement officer in Los Angeles County since March 2013. And those who knew Mayra Cornejo never expected what happened to the mother of five in Compton that night.

Mayra Cornejo, 34, was known for taking the neighborhood kids on outings to Chuck E. Cheese’s or the beach. She was also known for her generosity, sometimes taking her children to downtown Los Angeles to feed the homeless.

“She wanted to help out everyone,” said her sister, Violet Cornejo.

On Dec. 31, Mayra Cornejo was involved in an altercation that didn’t fit with the woman remembered by family members as outgoing and fun.

About 4:30 p.m., she arrived at a gas station with a gun, furious with her estranged husband. The weapon, which was registered to her husband, was usually kept in their Lynwood home, said Sheriff’s Lt. Eddie Hernandez.

Cornejo’s husband had recently been released from jail, and she found him near a pay phone. Cornejo allegedly fired once at the man. The bullet grazed his shirt.

He took the weapon from her and placed it on a nearby counter, but authorities said Cornejo grabbed the gun again.

When deputies arrived, Cornejo and the man were standing 2 to 3 feet from each other. Deputies yelled for Cornejo to drop the weapon, and she refused, Hernandez said.

Deputies at the scene said that Cornejo looked as though she was trying to fire the gun. Fearing for the man’s safety, they opened fire on Cornejo, who died at the scene.

Hernandez said that authorities are looking into Cornejo’s husband’s background and whether there was a history of domestic violence.

“The general public looks at this and says, ‘Wow, it’s a female,’” he said.

He said that the deputies involved have been emotionally affected.

“I think deputies react in the way that they’re trained,” he said. “It’s something that they have to deal with afterward.”

The last time a woman was killed by a law enforcement officer in L.A. County was in March 2013 in Pomona.

Since 2000, 20 women have been killed by police or sheriff’s deputies in the county, according to information released by the coroner’s office. The majority of the incidents involved women with weapons, such as knives, guns or hammers. Over that same period, more than 580 men were killed by law enforcement officials.

On Friday, Mayra Cornejo’s family continued a nightly vigil at the spot where she was shot, across the street from the Compton courthouse.

Bouquets surrounded candles and a box of donations for the woman’s burial. A cardboard sign read “Justice para Mayra.”

Violet Cornejo walked to her truck and grabbed recent photos of Mayra at a quinceañera celebration. Mayra, in a teal dress, posed for photos with her family and danced with her hands in the air.

“She was so happy that day,” Violet Cornejo said.

Her family still has questions about what happened that afternoon. Her sister wonders why there weren’t more negotiations during the incident at the gas station or why multiple shots were fired. She heard from people who said that they saw the confrontation and that her sister wasn’t holding the gun.

And the family is reliving a particular kind of grief. Mayra Cornejo’s brother died in police custody several years ago. In February 2007, Mauricio Paris Cornejo, 31, died after an altercation with LAPD officers in Boyle Heights.

A jury in 2012 awarded the man’s children $3.2 million in a wrongful-death lawsuit.

Photo:  A candle light vigil was held Friday evening for Mayra Cornejo, shown in the portrait at right, who was shot and killed by Los Angeles County Sheriff's Deputies after refusing to put down a weapon on New Year's eve. A shrine to her has been erected outside a gas station convenience store on Compton Boulevard where the shooting took place. Credit: Michael Robinson Chavez, Los Angeles Times

We had a similar incident in Ann Arbor, MI a couple weeks ago: Domestic dispute, man calls for police, police arrive, tell woman to drop knife. Next thing, the woman's been shot and dies. Just a tip: when armed police give an order to "drop the weapon" - everyone should damned-well heed the order.
OTH such "the police report says" incidents are creating a demand for more body cams on cops when they respond to a call.
Footnote: the article says there've been over 580 men shot in LA County since 2000. Either something's terribly wrong with LA area police or terribly wrong with LA area men. That's a bloodbath compared to almost any other part of the country. What the hell is wrong with you people?

This is why I love reading this blog from time to time. The comments are hilarious, off-the-wall, and sometimes just plain zany while other are informative, open-minded, and apparently well-intentioned.

Rich,
Where did you get your statistics? I don't remember reading in any Psych book that following directions was nearly impossible...nor do I remember hearing that it would take me 10 weeks to follow an order in boot camp. But I am willing to read it...just tell me where I can find the info you supplied so I can look it up or myself.

First anyone who has ever taken a psyche course knows that it is nearly impossible to follow a simple order. The classic example is on the first day of class they line five students and ask them to make peanut butter and jelly sandwiches. Even in the most elite colleges in America no one can follow that simple test. You tell them to pickup the knife and 3 of them will pick up the bread. It takes the army a full 10 weeks to teach civilians how to obey in order. On judgement day if you kill someone they will be resurrect and you will have to explain to God why you killed them. Most police officers need to keep that in mind, and I see the need to change the rules to allow people to be shot in the leg or arm to subdue him. Even Jeffery Dahmer and John Wayne Gacy deserve a trial. And if those serial killer can die in prison why would we want to kill the mentally ill or people who decided to run. Moreover the Dare programs in LA should teach kids to show the police their hands and not to reach into their waistbands. Teach the children how to honestly deal with the police and the number of police fatalies would drop. Alot of people would still be alive if they were taught not to run from the police, if you not killing someone or robbing a bank you will probable on get probation or at most a couple months in county jail. If Micheal Brown had not run from the cops it would be more than likely he would not even had been charged with robbery because it would have cost the State 10,000 dollars to prosecute him for stealing a couple packs of dollar cigars. Even the ACLU says don't run they shoot you in the back.
.

Police officers are trained to shoot and kill ( center mass ) once officers have their weapons drawn its best to comply with their orders, too many people don't understand simple commands, it's too bad this lady had to die, but she put other people's lives in danger by waving and pointing the firearm.

— mike c ; did you not read the part about her being armed and about to shoot someone?

What we have here is a case of contagious fire and acts of police lack of training and bluntly killers that FEAR FOR THEIR LIVES. Many times in the city of Compton we have witnesses scenes of crime(s) by the police where there could have been favorable outcomes like suspects living to tell their side of the story. What we The Community Legal Research Center is to have ALL officers tested immediately after having been identified as the Shooter in officer involved shootings and then having their locker and their cars investigated for possible steroids and other contraband not needed on the time of duty. We then can possibly find out the culture of those officers shooting and ask questions later. We will be moving forward with our preliminary finding(s) when officers who claim to PROTECT and SERVE and not be KILLER BEES....stay tuned...we will be successful in our pursuits for Justice.

That said, I am not claiming this shoot was justified. I do not know all the facts. Apparently a witness disputes the police narrative.

I would like to see video, but it may not exist. Let's wait to pass judgement and let the investigation proceed.

In movies and on tv it is easy to jump through a flaming hoop, do a barrell roll, shoot between you legs while lighting your cigarette in mid air and casually hit the running bad guy in both knees with only two shots.

The target is around a corner? No problem. Hell, I just richocet a bullet of a wall, or even "curve" the bullet like Angelina, right?

All she had to do was drop the gun. All the nice things are always said after death, what was the dark side?

Officers are not allowed to shoot in those areas intentionally. The rule is to shoot in the torso, but also "shoot to stop, not to kill", which really is oxymoronic.

A close relative (I won't specify) was an LAPD officer who had to shoot a man back in the 80's who was high on PCP lunging toward him with a knife. He thought "shoot to stop" so he shot the man in the leg. The guy goes down. Everyone lives. However, he was suspended for 3 months without pay for improper conduct (not shooting in the torso).

Hope this answers your question.

— Jay ; only in Hollywood do the police shoot the arms or legs.

This is a sad story indeed, but what if she had shot the man and killed him, then some would be asking why did the police not stop her? She was pulling at the trigger and was warned to drop the weapon, they are justified in their actions.

Jay,
The question you should be asking is why this women felt it was her right to take a gun and not only point it at someone but pull the trigger. And why she didn't just drop the gun when she was asked to drop the gun. If she had just complied this wouldn't be necessary.

Why doesn't the police ever shoot at feet, or arms? aren't they trained to know how to aim? the point is to apprehend, not kill.
Where the officers wearing cameras?

I believe both were wrong in there actions.

The police had to stop her from shooting someone. They did the right thing.

Families who have lost loved ones as a result of an Officer Involved (Law Enforcement) shooting, are invited to attend the National Association For Equal Justice In America (NAEJA) Meeting on Monday, February 02, 2015 7:00p-9:00p, at 600 North Alameda Street, Compton, CA, in the Blue Room.
The deaths of 6 0 4 people who lived in Los Angeles
County and were killed by law enforcement between
January 1,2000 and January 11, 2015.