Of youth pastor's murder, prosecutor asks: 'Why did such a bad thing happen to such a good person?' 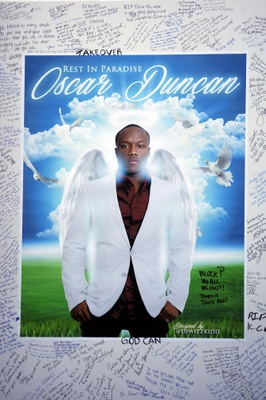 When the murder trial for the men charged with killing her son began four weeks ago, Belvery "Nico" Brown-Duncan stopped parking in front of her home, unable to bear the sight of where he had been slain.

Oscar Duncan, 23, was shot in the head June 4, 2012, steps from his front gate. He had just come home from dinner with his girlfriend. Her son was a football captain, homecoming king and youth pastor. He had done nothing wrong.

On Friday, a jury found Hopeton Bereford Parsley, 25, and Kevin Dwayne Green, 31, guilty of first-degree murder, with gang and weapon allegations. A jury also found Green guilty of a robbery 10 days prior to the shooting.

Duncan grew up in Venice's Oakwood neighborhood. At 14, he proclaimed that he wanted to be a pastor. His mother often found him awake in the early morning, studying his Bible. He tried to steer teenagers away from gang life through various groups. Days before he was killed, his managers at the Boys and Girls Club made the decision to give him a promotion to a full-time counselor.

"Why did such a bad thing happen to such a good person?" Deputy Dist. Atty. Gene Hanrahan asked a jury Thursday during closing arguments.

Prosecutors said that Parsley and Green, both Playboy Gangster gang members, were on a "crash and burn" mission.

"They were putting in work, going on a mission for their gang," Hanrahan said.

Duncan, who had never been arrested, had the "misfortune of being out there."

Before their encounter with Duncan, prosecutors said, the two men convicted in his murder, along with two others, drove to rival gang territories looking for targets. Green, who was on parole, was wearing a GPS bracelet that placed him at the scene of the crime, in addition to another shooting.

His movements were corroborated by records from Parsley's phone, according to court testimony.

About 10:30 p.m., a group in a white Lexus pulled up to Duncan and his girlfriend just after the couple parked their car. Someone from the Lexus made a comment about Duncan's girlfriend, then shouted "Venice Shoreline!," according to court testimony. Prosecutors said that was bait.

Duncan, who said he wasn't in a gang, approached the car to see if he recognized anyone.

From inside her home, his mother heard what sounded like screaming. She ran outside and found her son wounded.

After the shooting, a woman who had just parked her car was walking to her home when she saw the white Lexus drive past with the front and back passengers hanging out the window, celebrating.

Hanrahan, the prosecutor, told jurors that the men had no remorse. "They are cheering like the Lakers have just won the championship."

A surveillance camera later captured Green wiping blood off the side of the car with his shoe in an alley known as a Playboy Gangster hangout, according to court testimony.

James Mickles, a former Playboy Gangster who testified in court, said that Instead of "earning stripes" or prominence within the gang, others looked down at the actions of Parsley and Green.

"You just don't do that," he said. "They should have left him alone."

In closing arguments, defense attorneys questioned the credibility of witnesses. Nichole Sheran, 20, a gang member who was in the back seat of the car, changed her story multiple times, said Garfield Cramer, who is representing Parsley. He pointed out that Mickles also changed his story multiple times.

During the trial, a 911 tape was played for the jury. A dispatcher asks Duncan's girlfriend, Michisha Jiles, "Is he breathing?"

"It doesn't look like it," she replies. As the tape played, Jiles wept in court.

Green and Parsley face 50 years to life in prison. They are scheduled to be sentenced May 8.

Photo: A memorial poster for Oscar Duncan, signed by friends and family, at a 2012 news conference announcing a $50,000 reward for information leading to the arrest of those responsible for his killing. Credit: Genaro Molina

Correction, April 30: This post has been updated to reflect the correct spelling of Duncan's mother's name. It is Belvery, not Belverly.

Prayers from one mom to another mom who walks this path everyday of my life, I pray that this family heals from such a tragedy. How do you, one day at a time... Peace and comfort to this young mans family.

Pam said: 'However, common sense says that guns do not kill people......people kill people.' Actually, guns do kill people because people pick up guns, aim, and shoot. Bullets would come out to, oh let's say, splice through a human being. You need them both to cause death/injury. If it is about guns don't kill people...why have guns in the first place? For hunting? No one should kill animals either. If it's about target practice, go play darts. I would almost bet that if people didn't have guns, there would be a lot less deaths caused by other people. Shooting is a cowards way to kill. I am not for or against the NRA because I too believe that hoodlums and such will always find a way to get fire arms so why blame anyone about it. I just can't get the guns don't kill people part. Guns were designed to cause destruction...period.

wasnt greens pregnant wife shot and killed a few years back???? Then I think the had a green light him then sad people keep killing

I agree, people kill people....
A gun does not drive down the street and shoot someone does it?
A knife does not plunge its self into a person's body does it?
A car does not crash into another car or hit a pedestrian all by its self does it?
This truly twisted and illogical mindset that has filled our society, is slowly creating chaos everywhere.

These remorseless murderers will get guns and knives and whatever they need to do their deeds anyway they can. They do not care about the law or what is right or wrong, they just need to be stopped!

Many neighborhoods in safe areas have high levels of firearm ownership. Yet the people that live there are not prone to violence.

Um, just curious, but how does the NRA factor into this? The NRA did not murder the victim, the NRA did not hire someone to murder the victim. The NRA does not promote murder nor solicit murder. If the NRA did not exist, criminals and especially gang members would still have guns. Guns obtained on the black market, smuggled, home built etc. If guns were outlawed, the outlaws would still have guns. So..........it's a very far stretch to try and blame the victim's death on the NRA. I'm not an NRA member nor do I own a gun. However, common sense says that guns do not kill people......people kill people. And if it weren't a gun, they would find another weapon. I don't see people demanding the registration and regulation of knives even though thousands of persons are stabbed to death each year. A gun is a tool the same as a knife is a tool. It cannot act in and of itself. The person using the tool is solely responsible for how they use it. Let's stop blame shifting and start holding people responsible for their actions.

These gang members are some smart dudes!
"Green, who was on parole, was wearing a GPS bracelet that placed him at the scene of the crime."
He must've been the genius of the two.

50 year to life? Baloney. Gas chamber for both (and the whole gang if we can).

The question people should ask is... Why was Green out on parole in the first place? This is what people should be upset about. This is the type of thing that demands community ACTION.

I don't hear any public outcry over this or any call for him to be kicked out of office in disgrace.

It is the governors job to keep the people safe if possible. Jerry Brown has done just the opposite. I didn't mean this to be political, but facts are facts.